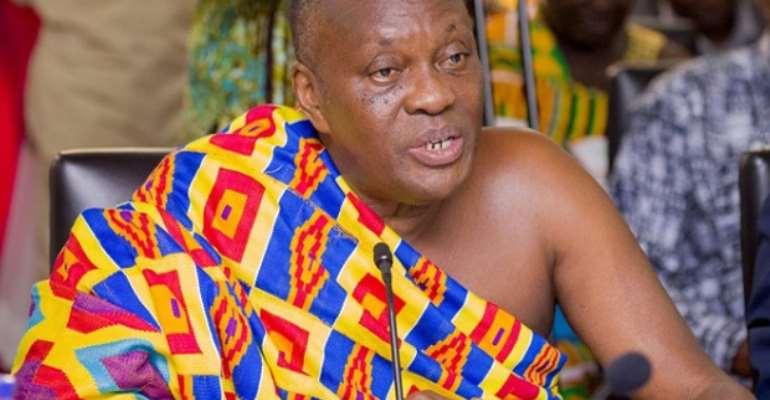 Chairman of the Council of State, Nana Otuo Siriboe II

The Chairman of the Council of State, Nana Otuo Siriboe II, has encouraged the leadership of the Electoral Commission (EC) “to remain focused in its bid to deliver credible elections in the country.”

He was speaking when a delegation from the commission visited the council last Friday to discuss the new voting system for the country.

The chairman's recognition of the independence of the commission, as enshrined in the Constitution, said it all about the Council of State's conviction after the presentation by the EC's IT Consultant.

The visit comes in the wake of the recent engagement by the Eminent Persons Committee of the EC and the Inter-Party Advisory Committee (IPAC) during which majority of political parties agreed on the need to compile a new voters' register.

The Information Technology Consultant of the EC was said to have made such a powerful presentation to the august council that their acquiescence was not in doubt.

The IT Consultant, Dr. Yaw Ofori Agyei, the man with vast knowledge about election management via IT, took the council through a comprehensive lecture, justifying the compilation of a new register.

He added that a report by the former vendor stated the current system had reached its end-of-life and end-of-support, thereby making it quite risky for any election management body to continue patronizing the equipment.

According to him, apart from the high cost of manual verification due to the nature of the old system, the commission would save the country GH¢173,077,650 should a new system be acquired for the 2020 General Election.

The Chairperson, Mrs. Jean Mensa, had earlier briefed the council on the justification for the replacement of the current register forcefully laying out the challenges posed by it; she did not forget to add the comparative cost of maintaining it.

The EC, under a new leadership, has continued to engage with stakeholders having previously met with the former Presidents, the President, media establishments, among others.

Consultations have also been held with parties and presentations made about the need for a new elections management system which includes the compilation of a new voters' roll.

With the major stakeholders now consulted, all is set for the EC to gird its loins for the compilation of a new voters' register from the announced date.

As to whether those scared about a new voters' register would continue their street demonstrations remains to be seen in the coming days.