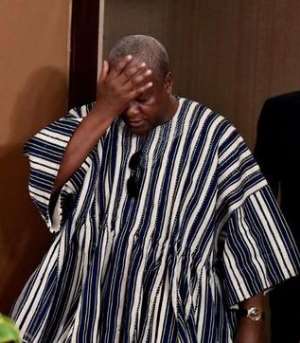 The recent chilling news that the Europe’s aerospace multinational, Airbus, has conceded paying huge bribes to Ghana in order to secure contracts during Mills/Mahama administration between 2009 and 2015, has somehow reinforced Mr Martin Amidu’s previous allegations that the late Mills set up a Committee to investigate his then Vice President Mahama over the dubious aircraft deals.

To some of us, the biggest alleged bribery and corruption scandal ever occurred in the history of Ghanaian politics, remains the dubious Brazilian Aircraft deal negotiated by the then vice president under Mills administration, John Dramani Mahama.

If you may remember, during his State of the Nation Address on 19th February 2009, the late President Mills informed the Parliament that his government was looking into the decision to acquire two executive Presidential jets.

However, the late President Mills was indecisive over the acquisition of the aircrafts and thus observed: "Ghana simply cannot afford the expenditure at this time and we certainly do not need two Presidential Jets" (thestatesmanonline.com, 16/06/2016).

Astonishingly, however, whilst the late Mills was joyfully delivering his euphonious state of the nation address, the Vice President John Mahama, who also happened to be the chairman of the Armed Forces Council, was blissfully entertaining delegations from Brazil, and busily negotiating the acquisition of five jets, including the most expensive hangar without the knowledge of the late President Mills.

Well, does the recent Airbus gargantuan corruption scandal give a clue about the dubious aircrafts deal negotiated by the then Vice President Mahama? Your guess is as good as mine.

Back then, the late President Mills became suspicious of the whole deal and decided to put a committee together to review the deal, according to Mr Martin Amidu.

If you would recall, a few years ago, Mr Amidu audaciously came out and told the good people of Ghana that President Mills of blessed memory set up a Committee to investigate an alleged cloudy Brazilian aircraft purchases negotiated by the then vice president, John Dramani Mahama (Source: martinamidu.com).

Given the bizarre circumstances, Ex-President Mahama may choose to continue to claim birth right to incorruptibility, but we will only take him seriously if he comes clean on the Brazilian Aircraft deal as revealed by former Attorney General under the late Mills and the current Special Prosecutor, Mr Martin Amidu.

In fact, back then, some of us could not trust our tympanic membranes when the erstwhile Attorney General under the late Mills and the current Special Prosecutor, Mr Martin Amidu disclosed somewhat sensationally that the late Mills somehow lost trust in his vice president, Mahama, over the dubious Brazilian Aircrafts deal, and therefore ordered an investigation.

Indeed, there is serious question here that the well-meaning Ghanaians must mull over and probe carefully: did Ex-President Mahama really indulge in dubious transaction?

Mind you, the allegation has become much more serious following the Airbus corruption scandal and the only way former President Mahama can obliterate the doubts from the minds of discerning Ghanaians is to lock horns with Mr Martin Amidu or face him in a competent court of jurisdiction.

So, who says that Mr Martin Amidu is lying through his teeth and therefore did not have in his possession the necessary documentation?

Whatever the case, we shall keep our fingers cross and look forward to observing the court proceedings.

In fact, I will venture to stress that if, indeed, the late Mills set up a committee to investigate his vice Mahama, then he probably had an irrevocable gleam of suspicion on his mind.

So upon a carefully considered deliberation, reflective thinkers may draw an adverse inference that the late Mills was not prepared to allow any member of his administration to dupe the country through corrupt practices.

Undoubtedly, the Late President Mills put his trust in his vice president, John Dramani Mahama, but if we are to believe the Airbus corruption scandal and Mr. Amidu’s account of the Brazilian Aircraft saga, we can draw an adverse inference that former President Mahama betrayed the trust the late Mills reposed in him. It therefore explains why the late President Mills set up a committee to investigate him.

Therefore, if corruption cases are hanging on the neck of an individual who is going to look after the national coffers, and has so far unwilling to seriously disprove such allegations, then discerning Ghanaians have to be really careful about handing him another term in office.

In ending, until former President Mahama comes clean on the Airbus corruption scandal and meets Mr Martin Amidu in the law court over the alleged dubious Brazilian Aircraft deal, the reflective observers will continue to stand with the indefatigable Mr Martin Amidu.

The author has 954 publications published on Modern Ghana.