Mahama to Reform Ghana Police Service? Give Me a Break! 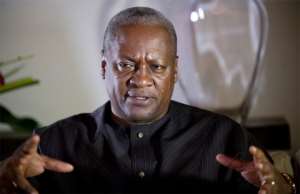 You see, the greatest political opponent of former President John Dramani Mahama is his own abysmally poor performance track-record as President for some four-and-half years; and then as Vice-President to the late President John Evans Atta-Mills for some three-and-half years. Anyway, at a propagandistically partisan “commemoration” of the first anniversary of the largely National Democratic Congress-provoked violence during the Ayawaso-West Wuogon Byelection, held exactly a year ago, to the day, to replace the recently deceased Mr. Emmanuel Kyeremateng Agyarko, Candidate Mahama was widely reported to have stated that in the highly unlikely event of him being nonconsecutively elected President of Ghana for the second time, he intended to “thoroughly reform” the Ghana Police Service (GPS) in order to make the service more professionally responsive, as well as functionally responsible, than it has been under the watch of President Addo Dankwa Akufo-Addo (See “I Will Reform Police Service if NDC Comes to Power in 2021 – John Mahama” Ghanaweb.com 1/31/20).

This ought to come to any adult Ghanaian citizen who has been studiously following political activities and events in the country for at least the past 10 years, as the most insulting public statement to have been made by any major Presidential Candidate since the inception of Ghana’s Fourth Republic. Indeed, if any Ghanaian leader is capable of positively and constructively “reforming” the way that the personnel of the Ghana Police Service go about their duties, the name of that politician is definitely not Mr. John “Boot-for-Boot” Dramani Mahama. At Ayawaso-West Wuogon on January 31, 2019, to hear Dr. Alfred Oko Vanderpuije, the former Atta-Mills-appointed Mayor of Accra, himself a bona fide member of the National Democratic Congress, tell it, it was Mr. Samuel George Nartey, the former Mahama Presidential Staffer, presently the NDC’s Member of Parliament for the Ningo-Prampram Constituency, also in the Greater-Accra Region, who rode herd on a motorbike-riding gang of party thugs illegally dressed in lookalike uniforms of National Security Agency (NSA) operatives, who kickstarted the violence, obviously in hopes of driving away enough of the heavily New Patriotic Party-leaning voters and constituents of the Ayawaso-West Wuogon, so as to ensure an easy victory for a politically desperate National Democratic Congress.

But, perhaps, what all progressive-minded Ghanaian citizens and voters ought to be asking is the following very significant and critical question: Precisely what reforms or positive and constructive changes did Mr. Mahama bring to the institutional establishment and structure of the Ghana Police Service during the nearly four years that he served as substantive Vice-President of Ghana and the Ex-Officio Chairman of the Police Council, the highest administrative and regulatory body of the Ghana Police Service? We need to also demand answers to the complete absence of personnel from the Ghana Police Service during the violent clashes that characterized the Talensi Constituency Byelection, in the Upper-East Region, in the leadup to the 2016 general election. Actually, it was sometime during the late summer of 2015. As well as the huge pockets of NDC-provoked violence that inflected the Akyem-Akwatia and the Akyem-Kwabeng (or Atiwa-Atweredu) byelections, both in the political stronghold of then Candidate Addo Dankwa Akufo-Addo of the Eastern Region.

There was also, of course, the Wassa-Amenfi NDC-instigated byelection-related incidence of violence that occurred in the Western Region, and others elsewhere across the country, that the “revolutionary” operatives of the Rawlings-fangled National Democratic Congress would rather keep under wraps. You see, the indisputable fact of the matter is that ever since Mr. John Dramani Mahama rose to political prominence as a cabinet appointee under the watch of Chairman Jerry John Rawlings, from his infamous “Shit-Bombing” of disagreeable media houses to the callous and unconscionable siccing of vigilante thugs on the main political opponents of the National Democratic Congress, “raw intimidation” has been the guiding phrase and principle of the modus operandi of the Mahama Posse.

In reality, what the former Atta-Mills’ arch-lieutenant means when the former NDC-MP for Gonja-West, in the recently Akufo-Addo-created Savannah Region, promises to “reform” the Ghana Police Service, in the highly unlikely event of him being nonconsecutively reelected President of the Sovereign Democratic Republic of Ghana, is simply to militarize the Ghana Police Service into a Boko Haram, Taliban and Al-Qaeda combined type of terror-spewing paramilitary organization. At Talensi, the Mahama-appointed Interior Minister, Mr. Mark Woyongo, claimed that the NDC-sponsored Azorka Boys militia group, “imported” from Tamale, had been justifiably sicced on the supporters and sympathizers of the then main opposition New Patriotic Party because it was the latter that had started the skirmish.

Where was the Mahama “reformed” Ghana Police Service personnel? You see, the decision by the Greater-Accra Regional Command of the Ghana Police Service not to have GPS personnel participate in the purely NDC-sponsored December 31st style “commemoration” of the Ayawaso-West Wuogon byelection to-do was perfectly the right judgment call. The event was more of a cheap political-point-scoring Mahama electioneering campaign than a solemn celebratory advocacy of the imperative need for peaceful elections in the country. Really, what kind of “reform” is Comrade “Boot-for-Boot” Mahama talking about here? Come on, Little Dramani, give us a break!