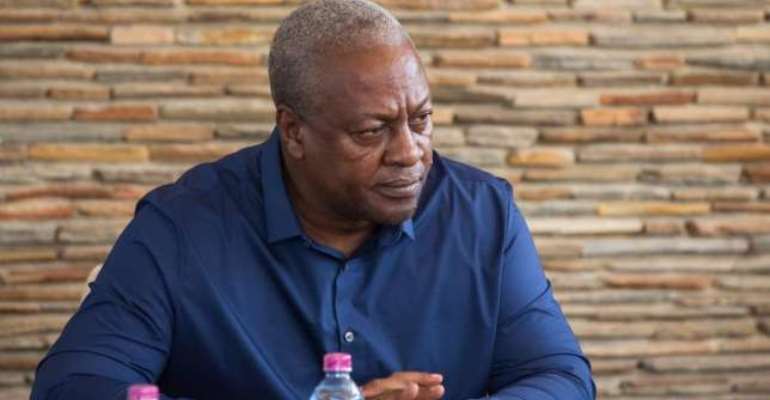 It is rather amusingly absurd to hear Candidate John Dramani Mahama hypocritically chide President Addo Dankwa Akufo-Addo for importing and commissioning some 307 state-of-the-art ambulances for use by hospitals and health centers, instead of resourcing these healthcare delivery facilities (See “Mahama Wants to Score Political Points with Criticism of Akufo-Addo’s Ambulance – Gov’t” News Desk – Modernghana.com 1/31/20).

Such vacuous criticism in of itself ought to inform any eligible and prospective Ghanaian voter that the former President has little to absolutely no remarkable appreciation for what it means to “resource” our public hospitals and clinics. For starters, Mr. Mahama was at the helm of our national affairs, all in all, for some 8 years, four-and-half of them as substantive President of Ghana and the Commander-in-Chief of the Ghana Armed Forces (GAF), and did a diddly little to absolutely nothing towards adequately resourcing our hospitals, health centers and clinics.

We must also take cognizance of the fact that it was smack under the sleepy watch of Little Dramani that the Central Medical Stores (CMS), the main medical supply center of the country’s public healthcare facilities , was reported to have been deliberately torched by some unidentified arsonists and literally razed to ashes. There is absolutely no credible evidence of any viable efforts having been made to immediately resuscitate the CMS.

It is also an inescapable case of striking self-indictment for the former Atta-Mills’ second bananas to rather comically accuse Nana Akufo-Addo of importing some 307 state-of-the-art ambulances at a time that not a single hospital in the country was adequately resourced to handle emergency cases. Now, the simple most logical question to ask is this: What was Mr. Mahama doing during the 8 long years that he sat in his comfortable and luxuriously appointed office at the Presidency and was, reportedly, busy negotiating for contractual quid-pro-quo bribes, including the infamous racket involving Burkinabe road and building contractor Mr. Jibril Kanazoe and the Ford Expedition SUV?

Even more significantly, if he had not been snoozing through most of the past three years while Nana Akufo-Addo was busy doing Ghanaians proud before the global community, Little Dramani would definitely have witnessed emergency medical supplies being swiftly and smoothly flown across all parts of the country by medical drones operated by the administrators and staff of the Ghana Medical Services (GMS). You see, Candidate Mahama simply woefully lacks any worthwhile knowledge and appreciation for what constitutes medical or health resourcing and the development of our beloved nation at large. No wonder then that he has already gone down the history books as the one Ghanaian leader who supervised the bleakest moment in Fourth-Republican Ghanaian history, if not, in the memorable and indelible words of his own political mentor and founder of his own political party, the National Democratic Congress, to wit, Chairman Jerry John Rawlings, the worst-performing President that Ghana ever had the misfortune of being cursed with in the postcolonial era.

Then also, even as Mr. Sekou Nkrumah, son of Ghana’s first postcolonial President, Mr. Kwame Nkrumah, recently noted, regarding what the younger Mr. Nkrumah found to be politically outdated about the thinking of Candidate Mahama, the mere construction of hospital buildings does not a viable healthcare system make. The ready availability of working tools and medications for our doctors, nurses and allied healthcare providers is what matters most. And any politician or leader who does not fully appreciate this basic fact of healthcare provision and/or delivery ought not to be running for any public office, period, let alone be megalomaniacally gunning for the very adult and highly responsible and buck-stopping post of President of the Sovereign Democratic Republic of Ghana.

Unfortunately, however, the Information Minister, Mr. Kojo Oppong-Nkrumah, sadly missed the point when the New Patriotic Party’s Member of Parliament for Akyem-Ayirebi chose to extraneously recall the fact that out of the approximately 600 ambulances imported into the country by the Mahama-led regime of the National Democratic Congress, only a measly 130 ambulances actually arrived in the country. Which scandalously means that a whopping 80-percent of the Ghanaian taxpayer’s money that was used for the purchase of the Mahama ambulances literally went to waste.

I bet we may have had a clinical idiot for President of Ghana from July 25, 2012 to January 7, 2017. At any rate, what is even more scandalous is the fact that more than 50-percent of the imported Mahama ambulances did not qualify to be used for the purpose for which they had been purchased. And of those that qualified to be used as roadworthy ambulances, nearly each and every one of them was too obsolete to be reckoned as being viable for the purpose. In other words, in Candidate Mahama, Ghanaians have the veritable profile of a clinically certified nation-wrecker who would have forward-looking and thinking Ghanaian citizens and voters unwisely elect him as their President and Supreme Commander of the Ghana Armed Forces for the second time. God Forbid!