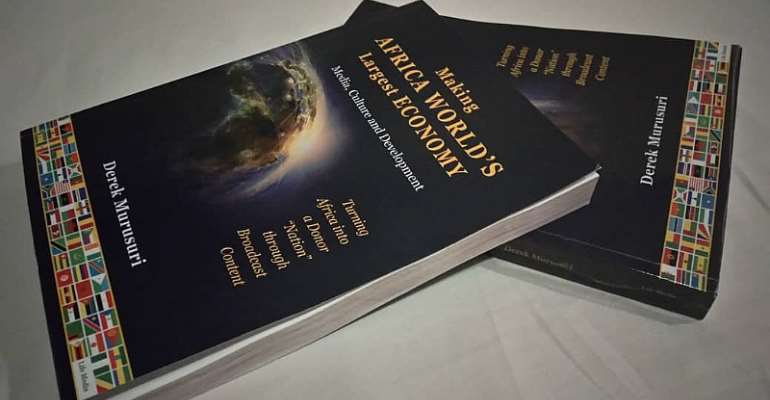 Derek Murusuri, author of the much awaited book scheduled for a grand launch in Dar es Salaam, capital of Tanzania located in East Africa, said his 21-year researched book, would definitely be a game changer for Africa’s future.

“This book is for Africa. It brings back to African minds, the forgotten concept of political and economic liberation. It breaths a fresh air in the struggle for Africa’s economic liberation in the World’s richest continent yet poor, a paradox indeed” the author explained.

“The young men and women of Africa must now rise to the new helm, as the roads rise to meet them, to rejuvenate the possibilities embalmed in their dreams which will raise new values, norms and beliefs to lead the continent to economic triumphs,” he added.

As a well-known fact, Africa’s economic development has sparked debates. The AfDB, the WB and the IMF as well as many other national and international agencies have identified key pitfalls in overall Africa’s development, leaving millions of population in abject poverty, economy under-developed and worsening economy.

The African Economic Outlook from the African Development Bank (AfDB) shows that the continent’s general economic performance continues to improve. Africa’s GDP growth was projected to accelerate to 4.0 percent in 2019 and to increase only slightly to 4.1 percent in 2020.

But, even that growth is not fast enough to address persistent fiscal and current account deficits and unsustainable debt. Indeed, countries have to move to a higher growth path and increase the efficiency of growth in generating decent jobs.

In addition, Africa’s working-age population is projected to increase from 705 million in 2018 to almost 1 billion by 2030. Economic unification was to be the solution to Africa’s development dilemma. It also requires political stability in many African countries. But, most leaders in Africa were reluctant to encourage observing limits to their political administration.

The International Monetary Fund (IMF) World Bank’s (WB) sub-Saharan Africa economic outlook for 2019, for example, pointed to the political uncertainty and a concurrent weakening of economic reforms could continue to weigh on the economic outlook in many countries.

Derek Murusuri, who lived and worked previously in the UK, said his book assures Africans to know and believe that they were never created to be followers, neither were they predestined underdogs.

Murusuri said he shares the ideas on solutions to end Africa’s centuries of economic bondage and hopelessness, sufferings of millions of impoverised population. The post-independence African leaders who came to power in recent years, exhibit the zeal to transform and change the continent, making it increasingly competitive. But these efforts have remained invisible and with little impact in large parts of the continent.

What the book says and whether the continent will truly gamble to skip the hurdles and navigate through becoming the world’s leading economy, is a matter for political scientists, academicians, politicians and other analysts who will scan the book, review and implement the author’s ideas. The book “Making Africa World’s Largest Economy” is available from January 2020.