FRED DIED IN LINE OF DUTY 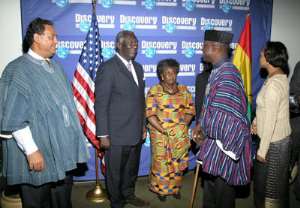 The news of the untimely death of Ferdinand Ayim struck me like a thunderbolt. More tragic was the manner he met his death which is a testament to the malaise and indiscipline that has pervaded our society.

Drivers do not give a damn to the rules and regulations that govern the operation and maintenance of motor vehicles. They park anyhow and anywhere, and operate with wanton abandonment, without regards for other road users.

This indiscipline has led to concomitant rise in aggressive tendencies on behalf of drivers and in road accidents running into the thousands for a small country like Ghana with a per capita head of one car per every 50 people.

The other day it was high value citizens like Prof J.M.K. Quartey, Dr.Isaac Bentsi and Dr. Benjamin Osei Wiafe, renowned urologists of Korle Bu Hospital, and today Ferdinand Ayim, an indefatigable primary mover of the wheels of governance in today's Ghana.

The cost to us as a country in terms of money, resources and lives lost or maimed is incalculable. What is going on, on our roads, is a direct indictment of the police MTU department, DMV – Department of Motor Vehicles and Licenses, GPRTU and drivers in general? Questions need to be asked how drivers get their licenses in Ghana, what training and tests they are requested to pass before they can operate motor vehicles.

In late 2005, I met Fred through his cousin, Angel Agyiri who is based in Maryland, USA. Angel had called to inform me that his cousin, who is a “Power Player” from the Ministry of Tourism, is in Washington with President Kufour, for the premiere screening of the documentary; “Ghana, The Presidential Tour” and would like to invite me to come to Washington for the coverage. I obliged to
Angel introduced me to his cousin, and Fred, who was walking with a stick after an injury he sustained at a previous event, extended a warm handshake to me.

He was happy to meet me; we exchanged well wishes and pleasantries and decided to engage each other. We bonded right there, I never met a man who was so budding with enthusiasm and thirst for Ghana's socio-economic development, especially in his area of specialty, eco-tourism.

During lunch hour the next day, Fred, Angel, officials from Ghana Tourist Board and I decided to go to a Ghanaian restaurant in Washington DC. As we got to the restaurant, placed our orders and were served, Fred requested water to drink, the lady who served us pointed to a nearby water cooler and said; “ Nsuo no nie, menye wo favor anaa, ok meyo wo favour - Here is the water, do you want me

Immediately, everyone present, burst into laughter and Fred found that funny and shocking at the same time. He asked, “What kind of restaurant is this?” He had come to patronize the restaurant and instead of being offered good service, he is being asked whether he needs a favor to be served with water. From that day onwards; I'll call him by the phrase; “Menye wo favor anaa - Do you want me to do you a favor” as a reminder of that funny incident.

Moving along to an interesting story, after the coverage of the entire event, Fred requested that his boss, Hon. Jake O. Lamptey, would like a photo album for his office so I promised to get him the photo album whenever I visited Ghana. The Photo album was made later and ready for Ghana.

I got to Ghana on March 4th, 2006 for a major assignment and called Fred that I was in town. He invited me to a cocktail event the next evening in honour of the executives of Discovery Channel and the Africa Society at the resident of the Hon. Minister. I got to the event and there was no sign of Fred.

Subsequently, I met him at the Independence Day Parade and asked why he did not attend the cocktail event; he said he had attended to an errand. Anyway, after we had spoken to each other, Fred said he was going to the Castle and that I should call him later so we can meet at his office in the morning.

The next morning upon visiting his office, Fred was not there and as I reached him on the cell phone, he said he had gone to Akosombo and was on his way to the office. I waited and waited but to no avail. I called him many times but he was always running up and down working non-stop, for and on behalf of the republic. I asked myself, does he sleep at all? The sad thing was Fred and I did not see each other again before flying back to the USA.

Fred Ayim is a distinguished public servant who exudes confidence. He speaks very well in public with confidence and he leads by example as role model and a leader with a heart of gold. Whenever he is being interviewed by a reporter, he would always look at the interviewer in the eye and speak eloquently. He has built a great reputation at the Tourism Ministry as a leader who did not care for “handouts” but that recognition should be given to those who deserve it.

Hon. O. Lamptey and Fred were at the Ministry of Information and together went to the Ministry of Tourism. Fred had learned the great lesson that one should never undermine his or her boss. A leader has to serve so he or she can be served by others. He has so much respect for his boss, the Hon. Minister and his boss too admired and trusted him to “run things”. The Minister entrusted Fred with overseeing many projects because Fred will “get the job done”.

Even after sustaining a severe injury which he mentioned confined him to bed and later walked with an aid of a walking stick, he never gave up working. He proved that his body might be injured but his heart was strong. The body might be weak but the soul was willing. He was a very humble person and the most popular spokesperson at the Ministry. The chemistry between him and the Hon. O. Lamptey was immeasurable.

A tireless, selfless, down to earth, well liked and well respected public servant who laid his life for his country in the line of duty. Ghana has lost a dear son and he will be dearly missed by everyone. The saddest thing for me which I will never forget was I never had the opportunity to say good bye to Fred because he was busy working day and night but I know he has said good bye to us all and he will see us in heaven where he will have an eternal rest.

My heart goes to Fred's family, Hon. Obetsebi Lamptey and his entire staff at the Ministry of Tourism and Ghana at large.

Freddie, It was worth knowing you, my good friend, now do us a favor and have some rest from a grateful nation till we meet in heaven. DAMIRIFA DUE, DAMIRIFA DUE!! ,