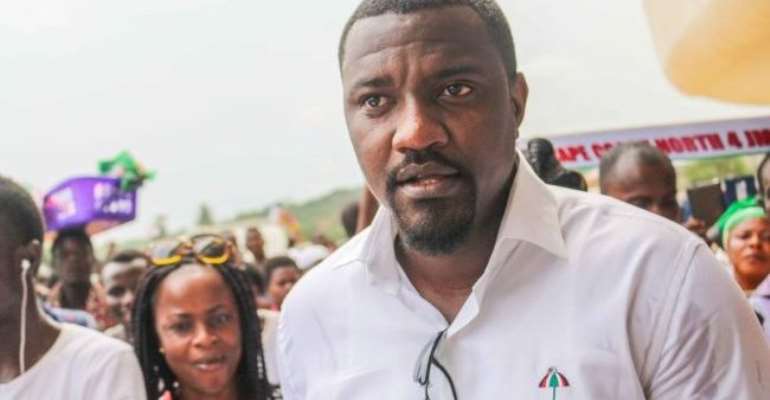 Addressing the gathering at the commemoration at the La Bawaleshie Presby School, Mr. Dumelo said although the party was invited, its boycott was unsympathetic.

“Those who came into power in bloodshed needs to be shamed. They should have been here to sympathize but they chose not to come. But we on the other side will win power without shedding any blood, violence and intimidation We shall win a free, fair and credible election with and without the new voters’ register.”

Former President John Mahama at the same event also said President Nana Akufo-Addo's failure to fully accept the recommendations of the Emile Short commission of enquiry makes a mockery of the law.

He said the inaction of the government had compromised the peace and security of the nation.

“If the current constitution of our national security remains the same, in the case where we need protection, do we seek refuge in the Police who were unaware of these rogue elements using Police vehicles and who stood passively by as these elements rained terror on innocent citizens?”

“The President, Nana Akufo Addo who should be defending the law, makes a mockery of it and thereby sets a dangerous precedent by accepting that assault is permitted if one believes that one has been provoked. Why did the President pretend he cared about vigilantism and wanted to tackle it and yet refused to abide by the key recommendations of the Emile Short Commission which among others included the prosecution of identified offenders and the disbanding of the illegal SWAT unit.” Sam George threatens to sue Nana Addo

The Member of Parliament for Ningo-Prampram, Sam George who was assaulted during the by-election, has indicated he will file a lawsuit against President Akufo-Addo next week, to challenge contents of Government's White Paper on the Emile Short Commission of inquiry report.

According to him, he will push Akufo-Addo to give life to recommendations made by the Emile Short-led commission. Kwesi Pratt blasts police over boycott

The Managing Editor of the Insight newspaper, Mr. Kwesi Pratt Jnr. also wants the leadership of the Ghana Police Service to explain to Ghanaians why the service personnel wa s directed not to provide security for the durbar.

“Yesterday, I saw a post on WhatsApp which was a directive from the hierarchy of the Ghana Police Service instructing all police personnel not to provide security for this event. This is the first time in my life and perhaps the first time in record history that a police institution is calling on policemen not to provide security. And if the police are not providing security, then what are the police there for?”

He further asked the Police service to provide the same security that is provided to both former presidents, Jerry John Rawlings and John Agyekum Kuffour to former president John Dramani Mahama.

It is recalled that there was a considerable level of violence at the Bawaleshie Polling station during the Ayawaso by-election a year ago after the death of the then, sitting Member of Parliament, the late Emmanuel Kyeremanteng Agyarko.

The incident led to several injuries as operatives of national security assaulted some voters.

The government then set the Emile Short Commission of Enquiry to look into the said incident and make recommendations.