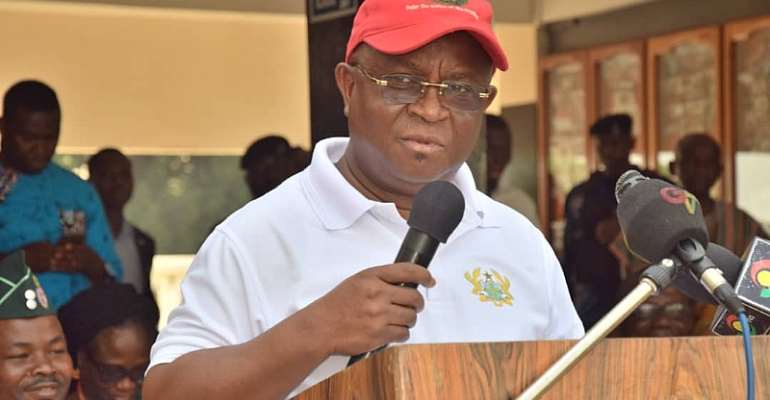 The Volta Regional Minister, Dr. Archibald Yao Letsa, has lashed out at critics for calling a decision by him to hold a handing over ceremony for some 18 ambulances meant for the Volta region, as a wastage of public funds -after a national commissioning ceremony was done for the ambulances on Tuesday.

According to Dr. Letsa, the decision to hold the ceremony is to afford persons who couldn't watch the Tuesday event on TV, the opportunity to know about the arrival of the ambulances.

"The people of Ghana, many of whom may not have watched the commissioning of the ambulances of television or might not have readd the newspapers also need to know what has happened", he said on Thursday at the VRCC.

President Nana Addo Dankwa Akuffo-Addo, in fulfilment of his 2016 campaign promise of '1 Constituency-1 Ambulance' commissioned a total of 307 ambulances out of which 275 are being distributed to constituencies across the nation.

On Wednesday, 18 of such ambulances arrived at the Volta Regional Coordinating Council in Ho, where a handing over ceremony was held by the Regional Minister to distribute the ambulances to the various MMDAs.

"When ambulances have been allocated to the Volta region, there is nothing wrong with the ambulances coming to the coordinating council for us to receive them and hand them over to be taken care of by the Assemblies".

He added that critics who are apparently not happy about the event, must seek for deliverance.

"Anybody who criticises this has a problem and we need to take him to the synagogue for deliverance".

The Regional Minister's comments follow a wide fire of condemnation by a cross section of residents of the Volta region when news of a 're-commissioning' ceremony broke on Wednesday evening.

The Ho Central Constituency of the opposition National Democratic Congress in a reaction to the news on Wednesday, criticised the Regional Minister and accused him of overseeing wastage.

In a statement signed by the communication officer of the Ho Central Constituency, Mr. Sefadzi Agama, the NDC described the event as an 'exercise in mediocrity'.

The statement added that "the intention of the Regional Minister is a loud testament to the fact that the Nana Akufo-Addo-led government has achieved very little despite the huge resource at its disposal hence making a festival out of this ambulance distribution.”