No Gov't Has Performed Than Us — Bawumia 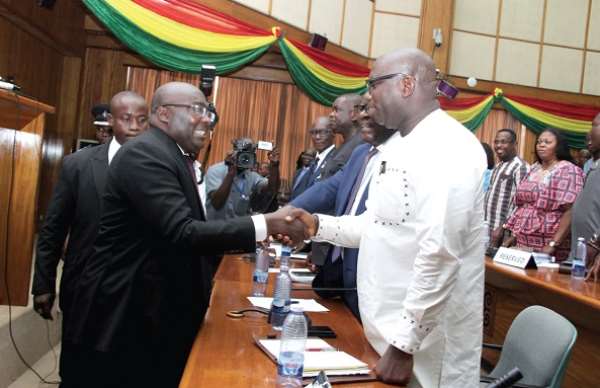 Vice President, Dr Mahamudu Bawumia, has said no government has performed better than the Akufo-Addo-led administration in terms of road infrastructure under the Fourth Republic.

He said the absence of an integrated data was making it hard for people to appreciate the phenomenal work done by the government in the road sector.

"We are, therefore, putting together an infrastructure development data to justify the work we have done and still doing"

Addressing a road sector retreat to map out strategies to operationalise the President's declaration of 2020 as a year of roads in Accra, Dr Bawumia said when the data was finally released, it would shock Ghanaians the amount of work the government had done.

Beach road
Dr Bawumia announced that the road from the Black Star Square to Nungua, otherwise known as the Beach Road, would commence in the next four weeks.

He noted that road infrastructure development was one of the major concerns for Ghanaians as revealed in the Afrobarometer Report.

He pledged the government’s unflinching commitment to meeting the needs and aspirations of the citizenry.

Contractors paid
While acknowledging that the country was saddled with serious challenges in the road sector, the Minister of Roads and Highways, Mr Kwesi Amoako Atta, said the government had began a massive road expansion and rehabilitation works.

“It is our hope that Ghanaians would be a little more patient with us while we fix the roads gradually and accept the fact that government cannot work on all roads simultaneously,”

He said government, towards the end of 2019, secured GH¢2.2 billion to defray part of arrears owed to road contractors estimated to be about 12 billion Ghana Cedis.

Mr Amoako-Attah said government since January 2017 to August 2019 had paid a total of GH¢1.7 billion of the outstanding arrears.He said GH¢ 1.0 billion of the amount received was paid to contractors, funded through the consolidated fund and the remaining GH¢1.2 billion would be from the Road Fund.

He said under the payment modalities, all payment certificates valued up to GHC 500,000 and below were paid in full and that would mostly cover contractors categorised as routine maintenance contractors or SMC.

Mr Amoako-Atta said that showed the government’s determination to ensure a stable atmosphere in the road construction industry to enable the contractors discharge their responsibilities effectively.