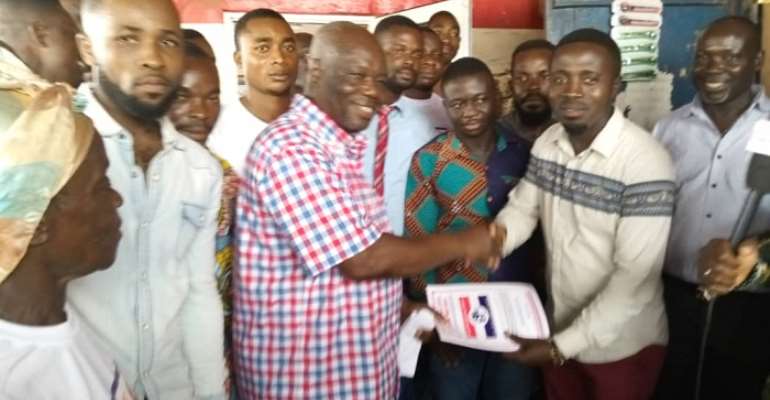 A former Western Regional First Vice Chairman of the New Patriotic Party (NPP), Kwesi Biney, has picked a nomination form to contest the parliamentary primaries of the party in the Ahanta West Constituency.

It was the Assembly member for New Amanful in the constituency, Dominic Dadzie, who picked the form last Wednesday on behalf of Mr. Biney, a veteran journalist and a former District Chief Executive (DCE) for the area.

Dadzie, who is the secretary to Kwesi Biney's campaign team, later met the aspirant who was being accompanied by his supporters, including delegates at Agona Nkwanta, and handed the form to him.

Presenting the form, Dadzie promised to work hard to ensure Mr. Biney becomes the NPP candidate for Ahanta West and subsequently retain the seat for the party during the December general election.

Mr. Biney would be contesting the incumbent Member of Parliament (MP), Kojo Kum, a legal practitioner, who has declared his intention to seek re-election.

The former DCE had promised to give the incumbent MP a keen contest and said he was determined to win the primaries and subsequently become the next MP for Ahanta West.

He revealed that some chiefs and people in the area had persistently been calling on him to enter the contest.

He urged his supporters to go out there, interact and convince the delegates about how he would be the ideal candidate to retain the seat for the NPP.

“Tell the people why I am coming and what is in store for them in the future. Let them make comparison on what the incumbent MP has done and what I can also do,” he said, adding “I have records in this district and everything that I did as the DCE for the area is there for all to see and when given the opportunity, I can do more.”

“The people of Ahanta West say they cannot allow the fortunes of this constituency to be in the hands of the sitting MP anymore because he is a disaster and that is why I am coming,” he said.

He admonished his followers to work hard to ensure his victory in the primaries on April 25, and maintain the momentum in the general election later in the year.