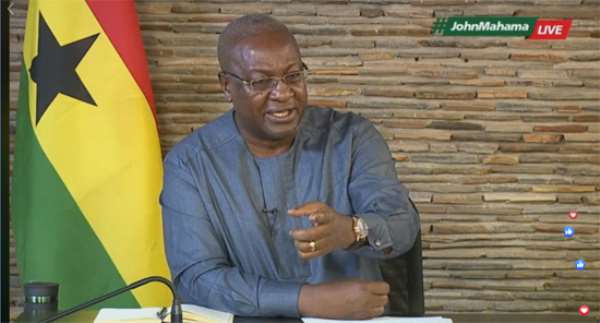 Former President John Mahama has promised to pay all the locked-up funds of depositors if he wins the December 2020 polls.

Depositors' funds were locked-up with following the banking and financial clean-up exercise undertaken by the Bank of Ghana last year.

“We believe that we do owe depositors”, the flag bearer of the National Democratic Congress said in a Facebook interaction, adding: “When I come into government, we will make sure we will pay depositors their monies within the shortest possible time”.

Mr Mahama chastised the Akufo-Addo government for the manner in which it carried out the clean-up exercise.

“The route government took on the banking sector was extreme and harsh and has created more harm”, he said on Thursday, 30 January 2020, adding: “I think that the government took this [decision] too quickly”.

“It has created a huge debt for the taxpayer”, he noted.

“The President has said that he is going to pay depositors in full but that is not going to happen in 2020”, Mr Mahama asserted, adding|: “Even if the government is going to pay that money, it is going to be spread over the next four years. So, depositors can’t sit and think they are going to get their money.”

The Bank of Ghana collapsed nine local banks, 347 microfinance institutions and 23 savings and loans; and finance houses within a space of two years.

Bribe payment for public services, others in Ghana worsening...
1 minute ago