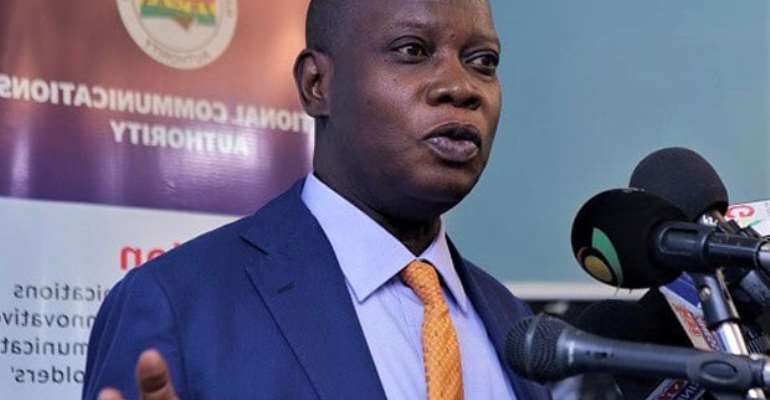 The former Director-General of the National Communications Authority (NCA), William Matthew Tetteh-Tevie, says the Pegasus Cybersecurity Equipment purchased by the NCA for the National Security Council Secretariat was the 'best'.

According to him, the Pegasus system is the finest cybersecurity and surveillance equipment in the world used in tracing what, he said, was the digital footprint of cyber terrorists.

Mr. Tetteh-Tevie was answering questions while under cross-examination from Asase Gyima, counsel for Alhaji Osman Salifu Mimina, in the ongoing trial involving him and four others for allegedly causing financial loss to the state over the purchase of the cybersecurity equipment.

The purchase of the Pegasus equipment for the use of the national Security Council Secretariat is the basis for the trial of Mr. Tetteh-Tevie and three former board members of NCA, as well as a private businessman.

The equipment which caused the state $4 million, according to the prosecution, was procured without the approval of the NCA board.

The accused persons are facing charges of stealing, money laundering, causing financial loss to the state, among other charges, before an Accra High Court.

Mr. Tetteh-Tevie, in opening his defence, said there was evidence to show that he benefitted financially from the purchase, neither did he cause financial loss to the state.

He then defended the equipment which was purchased from NSO, an Israeli company, through a re-seller, Infralocks Development Limited (IDL), whose Managing Director, George Dereck Oppong, is also on trial.

Mr. Tetteh-Tevie after briefly speaking about the capabilities of the equipment quickly pointed out that the whole thing is about national security and he does not think it is appropriate to talk about issues that concern state secrets in open court.

The court presided over by Justice Eric Kyei Baffuor, a Court of Appeal judge, sitting with additional responsibility, told the accused person that the issue of national security is for the state to assert its 'privilege', adding that if the prosecution does not exercise that 'privilege' then the evidence can go in.

The accused person also denied the charge of causing financial loss to the state, saying the equipment was brought to Ghana and cleared at the Kotoka International Airport in Accra and it was delivered to the National Security Council Secretariat.

The Director of Public Prosecutions (DPP), Yvonne Atakora-Obuobisa, then started the cross-examination of the accused person, asking Mr. Tetteh-Tevie about what his approval limit for expenditures were during his tenure as the Director-General of the NCA.

“I did not have approval limits as long as I got the green light from the board. So I cannot show you a particular document which says the approval amount for the Director General was 'x' amount of cedis,” he said.

“This will mean that you as Director-General could only spend with the approval of the board,” the DPP asked.

“The board has to give directives before I could spend. But for expenditures like medical bills, fuels and other miscellaneous expenses, I could approve those ones. But for big ticket items, I needed explicit approval from the board,” Mr. Tetteh-Tevie responded.

The DPP's cross-examination of the ex-NCA boss continues on February 4, 2020.