Otumfuo Lauds Akufo-Addo For Bringing Back Obuasi Mine 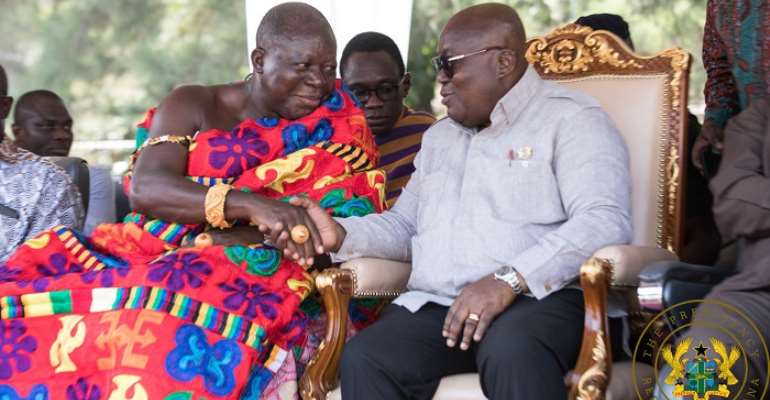 The Asantehene Otumfuo Osei Tutu II has lauded President Akufo-Addo for his instrumental role in the revamping of the Obuasi Mine of AngloGold Ashanti (AGA).

According to the king, the reborn of the mine is his greatest satisfaction in his 20-year reign on the Golden Stool, and that President Akufo-Addo and his government deserve unconditional commendation for seeing to the fulfillment of his campaign promise to the people of Ashanti Region.

“I ask all of you to join me in a well-deserved tribute to His Excellency, President Nana Addo Dankwa Akufo-Addo. He began this campaign at a time when Obuasi was on a death bed and he promised to do all he could, if elected, to revive Obuasi,” the Asantehene stated in a speech read on his behalf by the Juabenhene, Nana Otuo Serebour II, at a ceremony to commemorate the 'first gold pour' in Obuasi.

Otumfuo noted that President Akufo-Addo took office at a time of delicate negotiations between AGA and the Government of Ghana on steps necessary to secure the future of the mine and its viability.

“His personal attention ensured the conclusion in due time of an agreement which served the mutual interest of both Ghana and the shareholders,” he asserted and added that President Akufo-Addo is a germ.

The Obuasi redevelopment project, which has since produced its first gold, was personally spearheaded by the President in fulfillment of his campaign pledge to the people of Obuasi in 2016 as a candidate.

According to the President, his assumption of office saw the holding of a series of negotiations and discussions as well as provision of a number of fiscal incentives which led: first, to the establishment of the redevelopment project of the Obuasi Mine and second, to the first gold pour of the mine, which took place on December 18, 2019.

The Chief Executive of AGA, Kelvin Dushnisky, said the rebirth of the mine gives the company and its stakeholders great cause to celebrate and to reflect on the enduring power of shared values, commitment and true partnership.

The first phase of the redevelopment project has completed, and it involved project establishment, mine rehabilitation and development, and plant and infrastructure refurbishment to enable mining rate of 2,000 tonnes per day for the first operating year.

The second phase which includes the refurbishment of the underground materials handling system, shafts and ventilation, as well as construction of the primary crusher, carbon regeneration, a new gold room and a tailings storage facility.

Government is expected to rake in some $2.16 billion in revenue over the next 22 years in royalties, corporate and withholding tax in return for the provision of a number of fiscal incentives and guarantee of the stability of the project against changes in the legal environment, especially in the early years of the mine's operation.

The Minister of Lands and Natural Resources, Kwaku Asomah-Cheremeh, said the significant part of the mine's reborn is the interface into government's local content agenda by which AGA has agreed to prioritize Ghanaian businesses either solely or in joint venture with global leaders in its contracting and procurement processes.

According to him, the most notable one is the $375 million five-year mechanized underground mining contract for the joint venture entity known as Underground Mining Alliance Limited between the Austrian company, African Underground Mining Services, and its Ghanaian counterpart, Rocksure International.

“This is the first of its kind in Ghana and we expect its success to breed more of such. The many other medium to small-sized business opportunities created are no less commendable for growing the local economy,” he disclosed.

The minister added that another mark of positive outcomes from collaboration among stakeholders is represented by the benefit from the Ministry of Lands and Natural Resources working with the company to allocate infrastructure previously being used by the mine, but which AGA does not need any more to alternate uses to optimize development.

Government extends electricity to seven communities in Savan...
9 minutes ago