Mahama Will See Jubilee House Before Him, But Won’t Set Foot In There (Final) 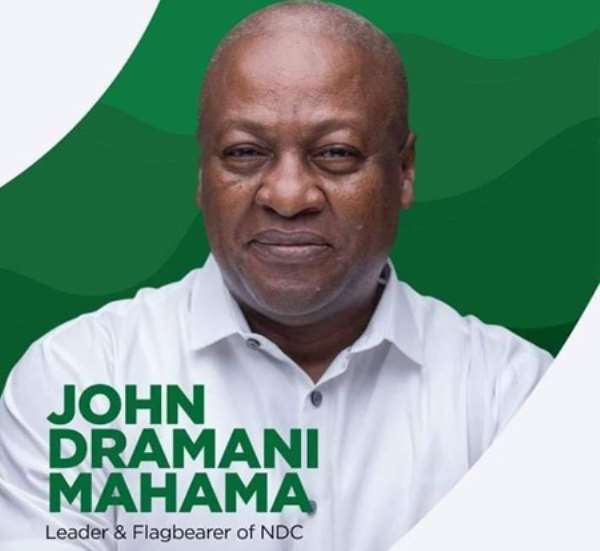 Take my word for it, dearest reader, sometime last year, I thought I was dreaming when I chanced on the unfortunate news about the misappropriation of $175 million loan facility secured in 2012 which was meant to provide seven district hospitals. But I was not. I was wide awake. The Mahama government indeed misapplied the loan facility on the blind side of Ghanaians.

The all-important question every discerning Ghanaian should be asking then is: why must the die-hard NDC supporters expect the Akufo-Addo government to use 36 months to fix the 96 months massive mess left by the erstwhile NDC government when the same people surreptitiously diverted $6 million of a government loan facility of $175 million meant to provide seven district hospitals into researching the then governing NDC's chances of winning the 2016 general elections?

The clandestine research was allegedly carried out by the United Kingdom-based SCL Social, the mother company of Cambridge Analytica.

According to the report, in spite of the fact that the SCL Social was given $6 million to carry out a nationwide survey to provide appropriate data for the proper planning of the healthcare needs of Ghana, the Mahama administration bizarrely deemed it fit to divert the loan facility for their internal research at the expense of the sick and infirm Ghanaians. How insensitive could Mahama's government be?

SCL Social admitted, “The work consists of two discrete political and public health elements. The political element is testing the attitudes and perceptions of the population towards contemporary issues faced in Ghana and public confidence in the capacity and competence of the NDC administration to implement appropriate timely solutions. As well as the level of satisfaction regarding the performance of the NDC at district, regional and national level is tested and the research incorporates how this may translate into future electoral success.”

The all-important question every well-meaning Ghanaian should be asking then is: where is the rest of the $175 million loan facility?

Dearest reader, how can we advance as a nation when some remorseless individuals keep hiding behind party colouration devoid of patriotism and rapaciously squander our scarce resources to the detriment of the poor and disadvantaged Ghanaians?

Let us face it, since the birth of Ghana's Fourth Republic (from 1993 to present), the nation has regrettably lost billions of dollars meant for developmental projects through unbridled sleazes and corruption. Why?

Tell me, dearest reader, if the rampant bribery and corruption, the stashing of national funds by some greedy opportunists, the misappropriation of resources and the crude embezzlement of funds meant for developmental projects by some public officials do not warrant criminal charges, then where are we heading as a nation?

You may believe it or not, there is admissible evidence of gargantuan bribery and corruption cases, including monies which were given to hangers-on who did not render any services towards the national development. Woyome and Akua Donkor come to mind.

How on earth would any serious and committed leader give away a large portion of our scarce resources in a form of two four-wheel drive vehicles and a luxurious bungalow, purported to cost a staggering $475,000 to Madam Akua Donkor of Ghana Freedom Party (GFP) for no work done?

Indeed, a large portion of Ghana's scarce resources regrettably went down the drain due to the mismanagement and the wanton corruption perpetrated by the officials of the erstwhile Mahama administration.

As I write, over 21 suspects of the previous Mahama administration are standing trial for alleged bribery and corruption.

Take, for example, sometime last year, a competent court of jurisdiction convicted two of the numerous corruption suspects in the erstwhile NDC administration and sentenced them to six and twelve years respectively.

In fact, I share in the sentiments of the concerned Ghanaians who have been maintaining all along that the sins of the two convicts are meagre in comparison with the other scandalous corruption cases which took place in the erstwhile Mahama administration.

In a related development, on 14th March 2018, the state filed a case of causing financial loss against the former Chief Executive Officer of COCOBOD and the CEO of Zeera Group of Companies and Agricult Ghana Limited, who have been accused of embezzling over GH¢260 million under the watch of former President Mahama.

But in spite of the admissible evidence of Mahama's government's unbridled corruption and incompetence, the loyalists NDC supporters would want discerning Ghanaians into believing that the erstwhile NDC government provided exceptional governance.

The good people of Ghana regrettably can attest to wanton corruption, incompetence and frequent abuse of power in the erstwhile NDC government.

Take, for instance, but for the Hon. Agyapong's whistling blowing prowess, former President Mahama's sibling, Ibrahim Mahama, would have evaded import taxes in the tune of GH¢12 million. How pathetic?

Delightfully, however, the EOCO ordered Ibrahim Mahama to pay the GH¢12 million as all his previous 44 cheques were dishonoured by the respective banks. How bizarre?

As if that was not enough, the Mahama administration revoltingly sanctioned a 30-year bauxite mining lease of around 58% to Ibrahim Mahama and his partners on 29th December 2016, just a little over one week for his brother's government to exit power. How pathetic?

In fact, it would be negligent on my part not to unload a truckload of appreciation onto the good people of Ghana for rightly choosing the septuagenarian Nana Akufo-Addo over the middle-aged Mahama on 7th December 2016.

It is also true that Akufo-Addo could not have chalked up the numerous successes without the able support of the hardworking men and women like the Amansie South District Chief Executive, Hon. William Asante Bediako, who in spite of the countless exigencies, is transforming the newly created district to the delight of his people.

We are, indeed, most grateful to Mr. Asante Bediako for swiftly moving to solve a serious problem in my hometown in the Amansie South District.

It was somewhat refreshing to hear the NDC Branch Chairman in my hometown in the Amansie South District singing the praises of Mr. Asante Bediako. More power to your elbow, Honourable DCE.

In ending, we should take solace in the fact that based on the prudent governance and the current favourable economic outlook, we can confidently rest assured that Ghana is heading towards the right direction under the able leadership of President Akufo-Addo.