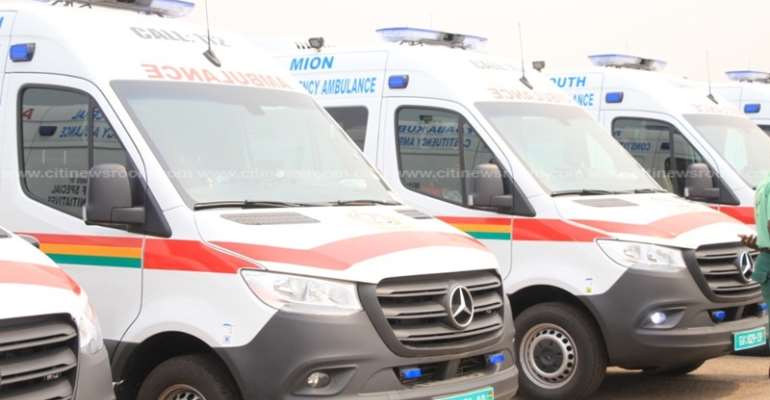 Following the official commissioning of the 307 parked ambulances by President Akufo-Addo this week, there have been several reports from other regions that the Ambulances distributed to the various constituencies are being recommissioned at MMDAs by government officials.

One of such regions that was accused in this agenda was the Central region.

It is against this background that the Central Regional Minister Kwamena Duncan has denied claims that he had recommissioned the ambulances discharged to the Region.

Akufo-Addo commissioned 307 ambulances to be distributed to all 275 constituencies in Ghana as a fulfilment of a promise made to procure an ambulance for each constituency to provide better healthcare services to Ghanaians.

But even though some of the regions have received their ambulances, some have decided to hold recommissioning ceremonies before dispatching them for use.

Among these was the Central Region, where it was alleged that the Minister in charge had held a second ceremony at the Regional Coordinating Council to launch the ambulances, a move, which most Ghanaians have criticised.

But the Regional Minister, Kwamena Duncan responding to these claims on Eyewitness News admitted that a ceremony was held as claimed but had nothing to do with commissioning the ambulances in his region again.

“We had a ceremony but it was not to commission [the ambulances]. Commissioning had already been done on Tuesday by the President. We had a meeting with all of us as stakeholders. Myself as the Minister representing the president of the region, and then the MMDCEs representing the presidents of the districts and then also the Ghana Health Service and such allied agencies who also have some sharing in terms of the purpose for which the ambulances were procured.”

“We needed all of us to know our specific roles and duties in ensuring that the ambulances will not just be showcases in the districts but that they will be committed to doing the work for which they were procured and also to prepare the paramedics to be well equipped to serve the people of the districts,” he stated. Situation in the Volta Region

A similar situation took place in the Volta Region where the Regional Minister decided to hold another ceremony to recommission the ambulances in his Region before distributing them.

Dr. Archibald Letsa, justifying his decision to do so said he feels some Volta Region residents who missed the January 28 ceremony deserved to see another form of commissioning.

“The people of Ghana, many of whom may not have watched it on television or might not have read newspapers also need to know what has happened. When ambulances have been allocated to Volta Region, there is nothing wrong with the ambulances coming to the coordinating council for us to receive them and hand them over to be taken care of by the assemblies,” he said at the Volta Region Coordinating Council.

But the National Democratic Congress (NDC) in Ho Central criticised his plans and accused the Minister of overseeing wastage.

Sefadzi Agama, the Ho Central Constituency Communication officer of the NDC, argued that “maybe somebody may be in the need for ambulances at the moment yet they have been lined up waiting to be recommissioned before distribution.” Situation in the Ashanti Region

Meanwhile, the Ashanti Regional Minister, Simon Osei-Mensah has handed over 47 ambulances to the various Metropolitan, Municipal and District Chief Executives in the region.

According to the Minister, all the ambulances have been made available for distribution to the various constituencies.