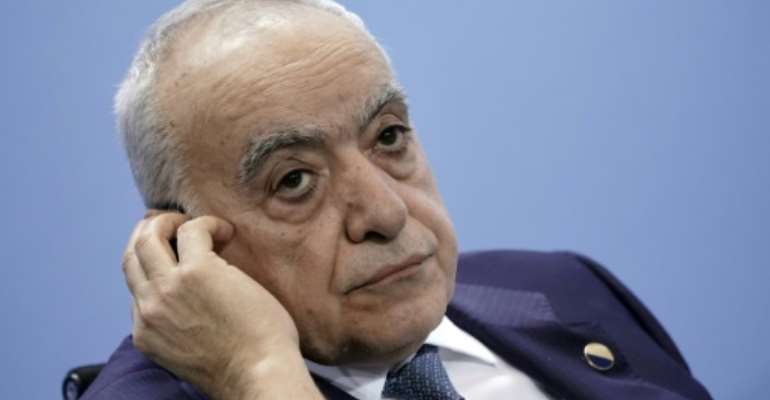 UN special representative for Libya Ghassan Salame warns that continued foreign meddling in the country's conflict threatens to fuel "a new and much more dangerous conflagration". By Michael Kappeler (POOL/AFP/File)

A UN envoy accused "unscrupulous" foreign actors Thursday of continuing to meddle in Libya's conflict, in violation of commitments made at an major international summit in Berlin this month.

Ghassan Salame said actors inside and outside of Libya "cynically nod and wink towards efforts to promote peace" but continue to "double down on a military solution."

He told the United Nations Security Council via video link from Brazzaville that maneuvers to resupply the two warring parties despite a UN embargo "threaten to precipitate a new and much more dangerous conflagration."

"They violate the spirit and the letter of the Berlin Conference," Salame said in an impassioned briefing to the 15-member council.

"I urge the parties and their foreign sponsors to desist from reckless actions and instead renew their expressed commitment to work towards a ceasefire," he added.

World leaders committed to ending all foreign interference and to uphold a weapons embargo to help end Libya's long-running civil war during a summit in the German capital on January 19.

Chancellor Angela Merkel, French President Emmanuel Macron and US Secretary of State Mike Pompeo were among dignitaries at the conference.

Salame said he was "deeply worried" by military reinforcements to both sides in the conflict despite the pledge to halt arms shipments to the belligerents.

He said they raised "the specter of a broader conflict engulfing the wider region."

The cargo ship Bana docked in Tripoli port on Wednesday, said the source, who asked not to be named.

Also Thursday, Algeria offered to host a reconciliation forum on Libya during a meeting of African leaders discussing ways to end the conflict, the African Union said.

The talks were attended by Moussa Faki Mahamat, chairman of the African Union (AU) Commission, several African presidents, and Salame.

The warring parties are led by strongman Khalifa Haftar and the head of Tripoli's UN-recognized government, Fayez al-Sarraj.

"(They) have continued to receive a sizable amount of advanced equipment, fighters and advisors from foreign sponsors," Salame said.

He cited in particular the reinforcement of Haftar's Libyan National Army (LNA) forces in Tripoli, including arms, equipment and soldiers, including foreign fighters.

Salame did not name any countries, Haftar has the support of Russia, Egypt and the United Arab Emirates.

Sarraj's Government of National Accord (GNA) is backed by Turkey and Qatar.

Salame said foreign fighters supportive of the GNA have been flown to Tripoli "by the thousands and deployed in forward locations, alongside Libyan forces.

He added that his mission had recorded more than 110 reported violations of a fragile ceasefire backed by both Ankara and Moscow that was installed on January 12.