Our Achievements Prove Our Policies Were Not Just Slogans – Bawumia 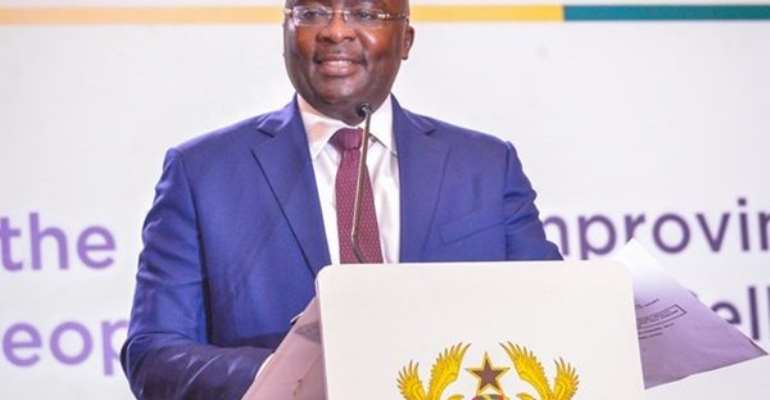 Vice President Alhaji Dr Mahamudu Bawumia has stated that his government's initiatives espoused during the campaign leading to the 2016 elections were not just slogans considering the benefit Ghanaians are enjoying from.

He said the programmes, such as the One District One Factory (1D1F), Planting for Food and Jobs and Free Senior High School, were all policies put in place to protect the vulnerable and the poor in the deprived communities.

Dr Bawumia was addressing the Ghana-EU Political Dialogue on the theme: “Ghana and EU partners for the future,” held in Accra on Wednesday.

He said government in three years had passed the Right to Information Bill into law, Company's Act, Office of the Special Prosecutor and also increased financial resources and logistics to institutions fighting corruption, including the Commission for Human Rights and Administrative Justice and Economic and Organised Crime Office.

He said the Ghana Police Service had also been resourced significantly in terms of logistics to help fight crime and make life better for the citizenry.

Dr Bawumia said government had put in place pillars that would grow the Country such as modernizing the system as well as an all-inclusive government that is the key to sustainability.

Government's introduction of the digital economy, he said, was yielding results in the fight against corruption, citing that corruption at the port had been curbed because the system had now become paperless.

He added that the digital economy had also curbed corruption at the Driver and Vehicle Licensing Authority, Passport's office, National Health Insurance Scheme, Hospital and even at the Court whereby the E-Justice system was preventing missing dockets.

Dr Bawumia said government would continue its fight against corruption in spite of what had been achieved, adding that government can specifically point at what it had done in the fight.

The Vice President noted that what the current government had done concerning corruption had not been done by any government for the past 30 to 40 years.

He said the battle against corruption was one that everyone must help to fight.

Alhaji Bawumia gave the European Union (EU) the assurance that Ghana would stick to its budget before and during the upcoming general elections.

The Vice President said government had already budgeted for various projects, which were on course and would ensure there were no budget overrun.

She said Ghana-EU dialogue would make room for expanding their engagement and address challenges that may exist.

Madam Botchwey said EU occupied a prime position in Ghana in terms of global trade and continued to be a major trading partner as well as the leading destination for Ghana's exports.

The Minister said in a fast-changing world, it was a safe anchor and vital link for a modern forward-looking and a sustainable Ghana.

She said the dialogue was timely because government had initiated programmes aimed at consolidating the macroeconomic environment whilst transforming the economy through initiatives, including, One Village One Dam and formalisation of the economy through digitization, all geared towards creating jobs for the youth.

She said Ghana was poised to design and implement effective strategies and policies to support rapid and inclusive economic growth, having received the right to host the Secretariat of the African Continental Free Trade Area.

The Minister solicited for the support of EU for Ghana's candidatures for the post of Director-General of the World Intellectual Property Organisation for Mr Edward Kwakwa and re-election to the Committee on the Elimination of Discrimination Against Women for Madam Hilary Amesika Gbedemeh.

Madam Diana Acconcia, Head of the EU delegation to Ghana, said Ghana with the right strategies in place would soon lead the way for the European-Africa cooperation.

In attendance were Ministers of State, Chief Directors and Directors of some Ministries, Heads of European member countries among others.