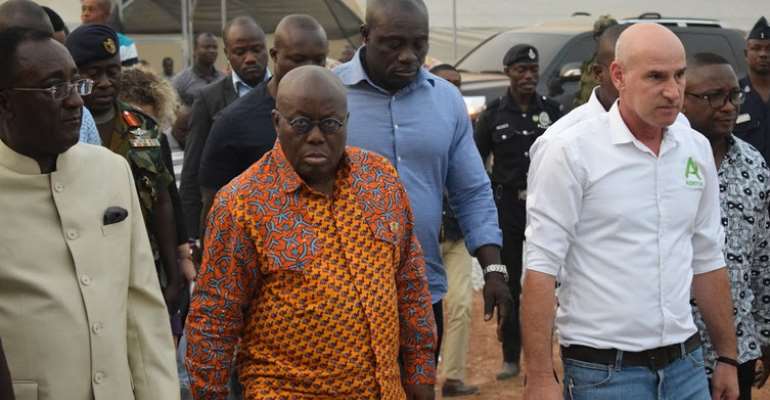 President Akufo-Addo has commissioned the Akumadan Greenhouse Capacity Building and Commercial Centre in the Ashanti Region.

Speaking at the commissioning ceremony on Wednesday January 29, 2020, the President recounted that similar facilities have been established at Dwahenya in the Greater Accra Region and Bawjiase in the Central Region, in furtherance of the vision to revamp and modernize agriculture.

These facilities, he said, come under the Greenhouse module of the Planting For Food and Jobs (PFJ) programme, one of the five priorities of government.

According to him, the background to the adoption of the Greenhouse Village concept is that, government inherited an agreement with an Israeli company to help restructure the vegetable sub-sector, with the view to maximizing production through the use of Greenhouse Technology.

The concept of Greenhouse Villages, he added, was wholly embraced because of its potential benefits to actors along the vegetable value chain and the economy as a whole.

“Under the agreement, government was to construct three Greenhouse Villages with the option of adding two after completion,” the President explained.

The contract for the construction of the Greenhouse Training Centres was awarded in 2015 at the cost of $ 19.7 million to Messrs. Agritop Limited, an Israeli company with expertise in Greenhouse construction, he recounted.

The scope of work for this project include the construction of Training Centers, Greenhouse Tunnels complete with automated Drip Irrigation Facility, Pack Houses, Cold Storage, a Maintenance Yard, Classrooms and Dormitory accommodation for visiting resource persons; all laid out on 5 hectare plots at Dawhenya, Akumadan and Bawjiase respectively, according to him.

He added that the scope also includes building the capacity of 540 youth in Greenhouse Crop Production Technology.

“Provision is also made for 18 training sessions throughout the duration with 30 students to be trained per session,” he said.

The main objectives for training our youth in this Greenhouse Crop Production Technology are:

• To equip the youth with knowledge, skills and expertise in crop production through the use of modern systems and technology

• To produce quality and fresh vegetables for urban dwellers in Kumasi, Accra and Tema, and also for export throughout the year.

Thus far, Mr. Akufo-Addo said, the first centre constructed on the Dawhenya Irrigation Scheme has trained 268 graduates already, made up of 188 males and 80 females.

“Out of the 268 trained, 51 were sent to Israel for a nine-month practical training to sharpen their skills and earn some income for the purchase of greenhouse kits, in order to establish their own greenhouses.”

"The returnees are expected to demonstrate their willingness and capacity to establish their own farms with some assistance from government. A second batch of 70 graduates from the Greenhouse Training Centre are currently in Israel undergoing similar training,” he added.