US general asks Europeans to do more for French in Africa 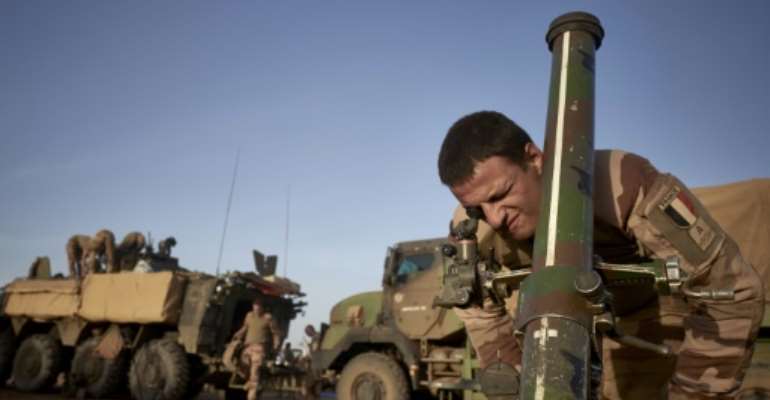 A French soldier of the French Army adjusts the coordinates of a mortar at a temporary base in northern Burkina Faso in November 2019. By MICHELE CATTANI (AFP/File)

The US commander for Africa said Thursday that European allies should do more to help France with airlifts and refueling in its campaign against extremists as the Trump administration looks to do less.

France has warned that US cutbacks could weaken its 4,500-member Barkhane operation, which looks to crush a resurgence of the Islamic State group and other extremists in the former French colony of Mali and its neighbors.

Questioned by lawmakers, General Steven Townsend, head of US Africa Command, acknowledged that the United States could reduce its presence in the continent as part of a global review.

"Airlift is one thing we're supporting the French forces with, air refueling for the French fighter aircraft is another thing," Townsend said.

"These are capacities that are resident in many European countries that they could provide," he told the Senate Armed Services Committee.

"And I think our department is going to lead an effort to try to get some European partners to do some of those things and offset the support we're providing now."

He said that the United States provided some more technical support such as surveillance that other countries were unlikely to match.

President Donald Trump has long demanded that European nations contribute more in defense and is not known for his interest in Africa, although he has vowed to keep pressure on the Islamic State group after withdrawing US forces from northern Syria.

The Pentagon is looking to prioritize resources in Asia, where China has been rapidly developing its military, and has sent thousands of additional troops to the Middle East as Trump confronts Iran.

The United States spends about $45 million a year to assist French operations in Africa in refueling and logistical transport.