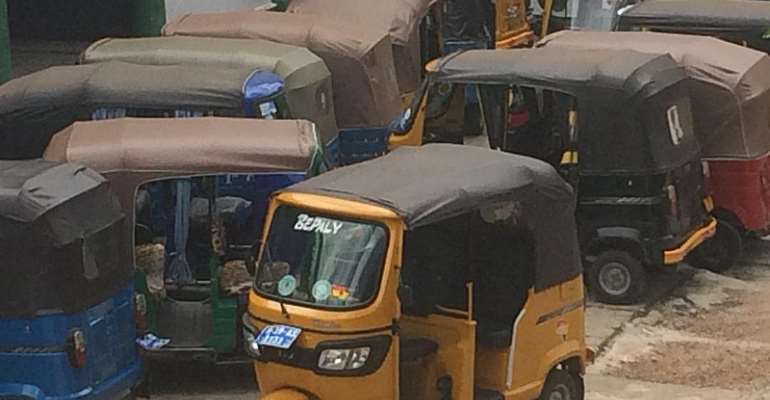 The Ashanti Regional Coordinating Council (RCC) is advocating for an enactment of a policy to restrict commercial tricycles-(Rickshaw), locally called 'Pragya' or ‘Mahama can do’, from operating in the Central Business District of Kumasi.

The Council also called for proper supervision of those tricycles by the Police Motor Traffic and Transport Department (MTTD) of the activities in order to bring sanity and discipline on the road.

“It looks as if those tricycles operate without any binding statutes – riding recklessly without any regard to safety measures and wanton disregard for motor traffic rules and regulations,” he noted.

Mr Osei-Mensah, addressing the Management of the National Road Safety Authority (NRSA) at a meeting in Kumasi, relayed the Council's suggestion that those tricycles must only be allowed to operate in comparatively less-congested areas.

This, according to the Regional Minister, was necessary in order to reduce their propensity for pedestrian knock-downs and collision with heavy-duty trucks.

The meeting aimed at briefing the RCC of the Authority's policy direction and activities designed to enhance road safety, and also to solicit the RCC's support for road safety campaigns in Ashanti.

A total of 334 persons lost their lives through road crashes in the Region between January and November 2019, according to the Police MTTD.

The figure is part of the total reported road crashes for the period, which stood at 2, 911 indicating a significant surge in road crashes as compared to the 2018's figure of 2, 454 cases recorded.

Mr Osei-Mensah assured that the RCC would continue to partner the NRSA in its campaigns to bring sanity on the road.

Ms May Obiri-Yeboah, Director-General of the NRSA, said they had increased their engagement with stakeholders to create awareness on the need for all and sundry to adhere to motor traffic rules and regulations for the safety of the public.