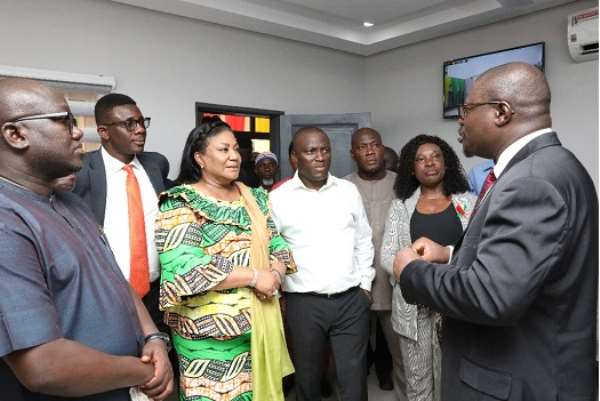 The renovation, which was done by the GCB Bank under its corporate social responsibility, comprised new surgical theatres, expansion of wards, re-wiring of the entire facility, and expansion of the waiting area.

Medical equipment and consumables to facilitate early diagnosis and treatment were also provided to the polyclinic which serves the people of Ashiedu Keteke sub-metro and its environs.

Built between 1963 and 1964, the Ussher Town Clinic, as it was formerly called, serves a population of over 146,000 patients, with the Out Patient Department (OPD) recording hundreds of cases on a daily basis.

Prior to the intervention of GCB Bank, there were leakages from the roof; the washrooms were inadequate and exposed electrical wires put both patients and staff of the clinic in danger.

Several simple cases had to be referred to Korle-Bu Teaching Hospital or the Ridge Hospital because of obsolete equipment.

Opening the facility, Mrs. Akufo-Addo expressed her delight in GCB Bank's decision to partner the government to enhance health delivery in the country.

She said the people would be grateful to the bank for renovating the Ussher Polyclinic and also constructing a surgical theatre.

She said over the years, The Rebecca Foundation had been working to augment the effort of government to provide quality healthcare for the people, especially in deprived communities and had been urging corporate institutions and benevolent individuals to join the 'train'.

Mrs. Akufo-Addo also announced the donation of some health equipment to the Ussher Polyclinic and James Town Maternity Theatre.

One of the theatre rooms

“At The Rebecca Foundation, we also believe in the philosophy of partnership for enhanced health delivery and so given our shared belief and vision, we are donating some hospital equipment and supplies provided by the UNFPA, to support the work of the Ussher Polyclinic and the James Town Maternity Theatre,” she said.

The Managing Director of the GCB Bank, Anselm Ray Sowah, said the new facility would help to improve the health delivery challenges of the area.

He advised personnel of the polyclinic to protect and maintain the installed medical equipment.

Besides, the occasion was used to unveil the ambulance for the Odododiodioo Constituency under the “One-Constituency One-Ambulance” programme.