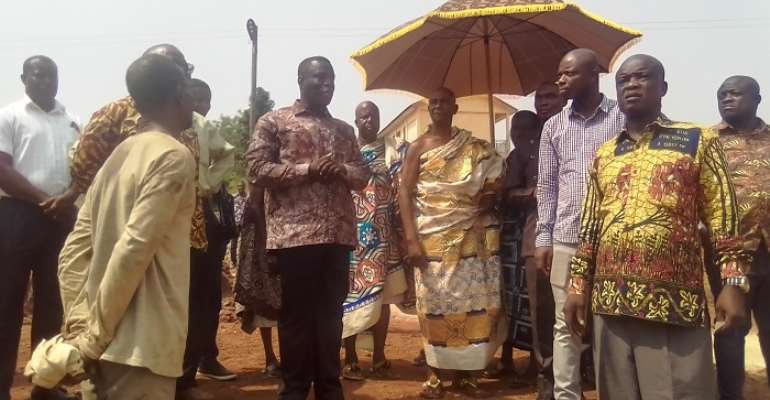 Contractors of Free SHS projects have been tasked to complete the projects on time before their certificates for payment will be honoured.

Currently, there is massive construction of additional facilities such as classroom blocks, dormitories, assembly halls, dining halls, among others, in various second cycle schools all over Ghana as part of the government's effort to phase out the double track system.

The Minister of Employment and Labour Relations, Ignatius Baffour-Awuah, served the notice when he inspected ongoing government projects in some schools on Tuesday in his constituency, Sunyani West.

The inspection took him to Chiraa Senior High School where he inspected a six-unit classroom block that had reached roofing level but expressed dissatisfaction that 'shoddy' work was being done by the contractor.

The minister urged the headmaster and Chiraahene to constantly inspect the ongoing work and give a report.

Apart from the six-unit classroom block, the minister also inspected ongoing works on three dormitories. He commended two of the contractors whose work was about 90% complete but again was not happy with another contractor whose work was less than 40% complete.

The Member of Parliament later met with staffs and students and on behalf of the Education Minister and handed over 360 metal dual beds, 720 mattresses and 270 chairs and tables and teacher's desks.

The minister advised the students to study hard in order to chalk up success in their exams to justify the huge investment the government is making on them.

The Chiraahene, Nana Afari Mintah, accompanied the minister to inspect the projects and were taken round by the Headmaster of the school, Francis Antwi-Bosiako.