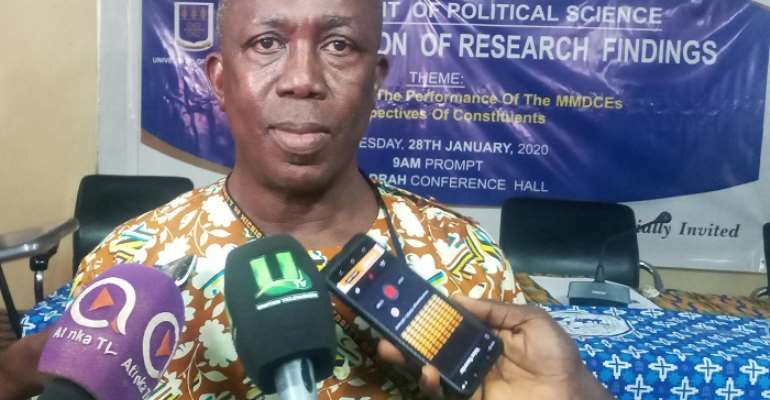 Kaakyire Frimpong, of the Department of Political Science, Legon

A survey by the Department of Political Science of the University of Ghana has revealed that the overall performance of metropolitan, municipal and district chief executives (MMDCEs) in carrying out developmental projects in their various assemblies have been “unimpressive.”

According to the study, almost half of the responses denounced their MMDCEs for their inability to bring development to their localities.

Also, critical social infrastructure such as markets (4.3 per cent), roads (6.5 per cent) and schools (10.1 per cent) had received little attention, the study further revealed.

Only 2.4 per cent of respondents rated their MMDCEs in the delivery of community development projects as excellent; with 6.3 per cent rating them 'very good' and 24.6 per cent as 'good' – having a cumulative score of 33.3 per cent.

As to whether the performance of the MMDCEs would affect the people's choices in the 2020 presidential poll, a little over half (51.0 per cent) of the respondents said no, whereas 39.9 per cent gave a yes. In addition 9.1 per cent were indecisive.

The findings were made public at a ceremony held at the Kofi Drah Conference Hall of the UG on Tuesday.

A representative of the Department of Political Science, Kaakyire Frimpong in his remarks, posited that the study which spanned between 2017 and 2019 sought to focus on the MMDCEs in order to establish the degree of their impact on the decentralization process.

“It assesses, from the perspective of citizens, the extent to which the MMDCEs have performed their functions, that is, how they have engaged various actors to promote local development,” he noted.

The study was carried out in five electoral areas across the 275 constituencies in the country with a maximum of 100 respondents from each constituency.

Only the Ayawaso East and North municipal assemblies had three electoral areas each.