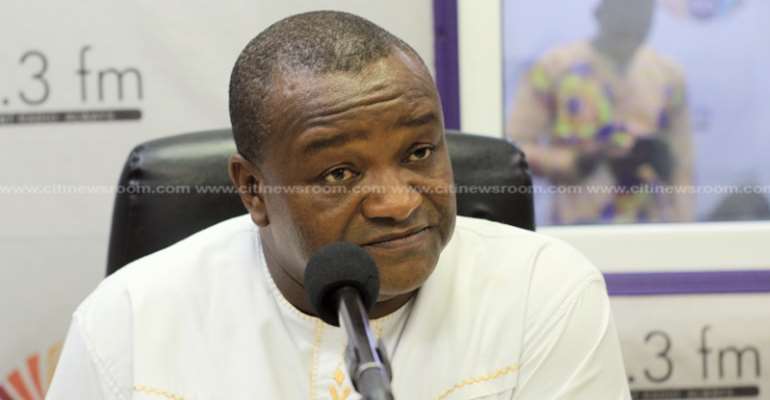 Members of the Inter-Party Resistance Against New Voter Register says they will back down on their protests against the compilation of a new register if the Electoral Commission manages to convince them at the Inter-Party Advisory Committee (IPAC) scheduled for today, Thursday.

A leading member of the group and founder of the All People's Congress (APC), Hassan Ayariga gave the hint on the Point Blank segment on Eyewitness News on Wednesday.

Ahead of today's engagement with the Electoral Commission, the group which comprises some opposition political parties had been demanding a live coverage of the meeting.

Hassan Ayariga told host of Eyewitness News, Umaru Sanda that, the reason for their call for a live broadcast was to enable Ghanaians to follow proceedings so they could judge for themselves.

“We will back down only if they are able to convince us why the current voter’s register is not credible. It’s just that we want every Ghanaian to watch the debate between the EC and the political parties to see who is right. We want the world to see that we are not doing propaganda with the issues. So, we are going there because we want the EC to convince us to believe that we can have a [credible new] voter register. But it seems the EC has taken a rather entrenched position,” he said.

Addressing the press on Wednesday, the Chairman of the People's National Convention, Bernard Mornah, noted that although the coalition will attend the scheduled meeting with misgivings, they will do so “with an open mind.” Eminent Advisory Committee to meet EC, IPAC today

An IPAC meeting will be held later today, Thursday, in Accra over the controversy surrounding the Electoral Commission's (EC) decision to compile a new voters' register ahead of election 2020.

The meeting is being convened at the behest of the EC's Eminent Advisory Committee which had called for an all-inclusive engagement on the issue.

A statement signed by the EC's acting Director of Public Affairs, Sylvia Annoh, on behalf of the Committee said the meeting seeks “to engage with the Inter-Party Advisory Committee on the Electoral Commission's plan to compile a new Voters' Register ahead of the 2020 Presidential and Parliamentary Elections.”

The EC plans to abandon its current biometric verification system and procure a new one which has a facial recognition technology. The Commission also plans to compile a new voters' register.

But these plans are being opposed by a coalition of political parties known as the Inter-Party Resistance Against New Voter Register.

The National Democratic Congress (NDC) is among the parties opposing the new register.

The group maintains that any money spent on the register will be a waste of the taxpayer money.

The NDC walked out of an IPAC meeting on December 10, 2019, when the matter came up.

The EC had earlier given suggestions that it was determined to go ahead with its plan without the buy-in of the opposing political parties, raising concerns about the lack of consensus among the stakeholders.

But on the 15th of January, 2020, the EC's Eminent Advisory Committee called for calm and said it planned to meet the various stakeholders on the matter.

Today's meeting, to be facilitated by the EC's Eminent Advisory Committee, is expected to produce a lasting consensus on the matter.

Government extends electricity to seven communities in Savan...
12 minutes ago