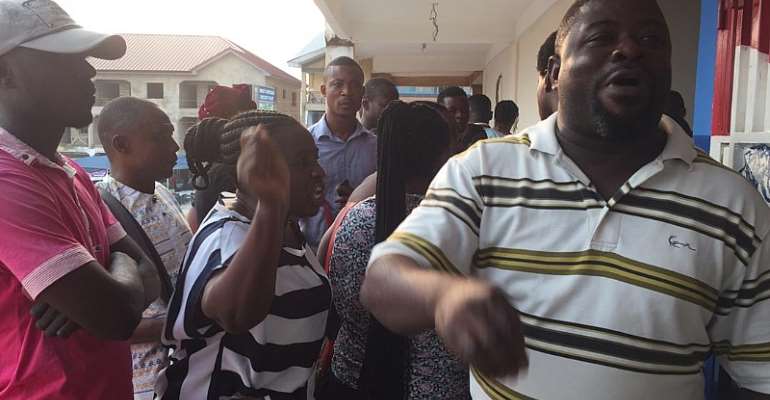 There seems to be a silent outrage that is gradually manifesting in all aspects of politics in the Dome-Kwabenya Constituency branch of the ruling New Patriotic Party (NPP) in Accra.

This situation, according to signals picked up is likely to have dire consequences on the impending NPP primaries.

Constituency Executives including some NPP members are kicking against the re-election bid of the incumbent Member of Parliament (MP) for the constituency, Sarah Adwoa Sarfo.

According to them, it is time for change in the leadership of the party in the constituency, adding that eight years are enough for the MP who doubles as Minister of State in charge of Public Procurement as well as Deputy Majority Leader in Parliament.

They made this known as they registered their grievances over misgivings in the constituency and the Ga East Municipal Assembly where they believe there is some deliberate and calculated effort to reject some government appointees to the Assembly.

One of such government appointees that have been rejected by the Assembly, they claimed, is the NPP’s Constituency Organizer, Mahmoud Kwadwo Asamoah.

According to the aggrieved members and officials of the party who are calling themselves Friends of Mahmoud, some persons at the Assembly have adopted the “we can’t work with them” mentality.

Addressing the media from the Constituency office in Dome on Wednesday, January 29, 2020, Francis Odei Ansah, Zonal Coordinator for Atomic Hill Estate, described the rejection of Mahmoud and other party members as unfair.

“This press conference is intended to address the pending unfair treatment of the constituency executives by the region particularly in the case of Mahmoud Kwadwo Asamoah whose appointment to serve in the Ga East Municipal Assembly has been manipulated and cancelled in the name of so-called ‘order from above’ which most of our support base describes as ‘I cannot work with you’ syndrome existing in the Constituency,” he said.

DGN Online gathered from some sources at the press conference that there is friction between some of the executives in the Constituency and Adwoa Sarfo.

This portal is informed that in the last constituency election held in 2019, Madam Sarfo presented about 10 persons all of whom lost.

However, sources say, she managed to get the current Nasara Coordinator and Youth Organizer of the Constituency back to her fold.

Mr. Kwadwo Asamoah who used to be in her camp reportedly left, and the two are said not to be on good terms.

Another factor said to be dividing the constituency is the intention of Mike Oquaye Jnr, current Ghana’s High Commissioner to India intention to contest for the NPP’s parliamentary ticket.

Some Constituency members who spoke to DGN Online on condition of anonymity say Mr. Ocquaye is being ‘backed’ by his father, Speaker of Parliament, to unseat Madam Adwoa Sarfo.