Can Akufo Addo Tell Ghanaians How Ghana Beyond Aid Becomes A Country Under Heavy Debt? 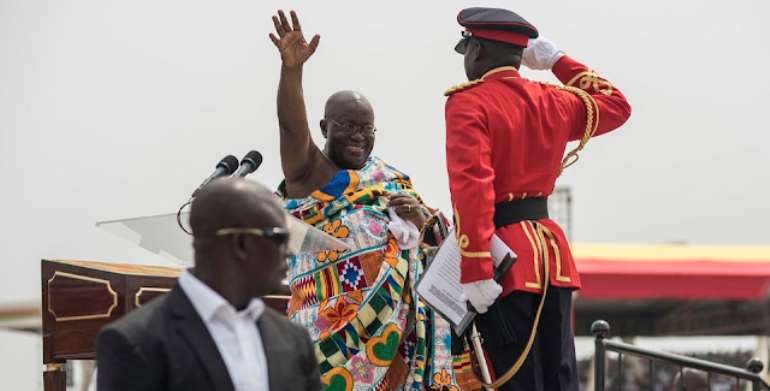 Nana Akufo-Addo, the Ghanaian president once said in his speech, during his visit to Paris that we must stop believing in "the story of Santa Claus who will come to develop the continent,” according to him, his doctrine to free Ghana from International Aid is: “Ghana beyond aid.”

President Akufo-Addo promised to build a country in which developments will never again depend on the assistance of rich countries. Is the man really serious about what he says, to impress or just wishful thinking?

Because he has failed miserably in many things, including his fight against corruption in the country.

Often shown as an example for its democratic achievements and robust growth, Ghana gives reason to hope. The former Gold Coast is the first country in sub-Saharan Africa to have reached the number 1 Millennium Development Goal (MDG), which aims to halve the rate of extreme poverty.

It went from 52% in 1992 to 28% in 2006, then to 24% in 2013, according to Ghanaian statistics, due to the country taking advantage of its economy rich in raw materials of all kinds, such as gold, bauxite, manganese, but also cocoa, coffee, cashews and the discovery of oil deposits.

This development has also led to an improvement in the human development index, measured through gross income per capita, life expectancy at birth and access to education. Ghana is one of the rare countries in sub-Saharan Africa classified in the category of countries with average human development.

Taking advantage of foreign exchange earnings during the years of strong growth, the government set up several social assistance programs. The most emblematic, subsistence income against poverty was launched in 2008.

According to the authorities, 330,000 households today receive an allowance and fulfill, in exchange, certain obligations, such as the education of their children.

However, economic growth is not very strong in the industrial sector, which could have created jobs. Many Ghanaians are self-employed and make a living from trades or agriculture and the oil sector does not provide many jobs either.

The benefits of record economic growth over the past decade have gone mainly to the wealthy. As a matter of fact, inequality is greater than ever in Ghana, this has created unemployment and poverty in Ghana.

On average, a quarter of Ghana's population still lives below the poverty line and in certain places, particularly, the north, rural and landlocked, destitution can affect 70% of the inhabitants.

For example, in Tamale, located some 100 km from the border with Burkina Faso, the inhabitants of this region, mostly farmers and pastoralists do not have the basic public infrastructure, particularly in the fields of health and education.

This article can’t be complete if this issue is not discussed. How can Akufo Addo, proudly presents in his speech that Ghana doesn’t need aid as a nation, yet, since coming to power, within three years, he has increased Ghana’s debt by about GS86.6 billion?

The stubborn Ghanaian leader, wouldn’t accept his mistakes for his bad policies affecting the nation. When a section of Ghanaians, the opposition and some economics warned him about his fast borrowing spree which will plunge the nation into an economic crisis, Akufo Addo responds, “Even America borrows.”

Yes, he is right, America borrows but they know how to utilize the resources taken from Africa and also know how to create jobs for the unemployed population but look at you Akufo Addo, what do you know?

How many banking institutions have collapsed under your administration, will you also blame the NDC for that?

You can’t shout Ghana beyond aids and later create such a huge debt for the country to carry, would anyone call that efficiency? I feel very sorry for the common Ghanaians.