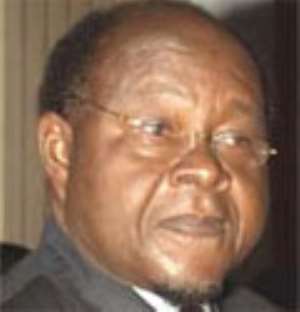 No palaver with Oquaye's houses Chronicle -- THE Minister of Energy, Professor Mike Oquaye yesterday finally granted The Chronicle an interview to wrap up weeks of surveillance that this newspaper had mounted on him, confirmed all that we had gathered about his assets, but provided substantial evidence that every piece of property was ;egitimatelt acquired.

The paper's further investigations into the allegations reveal that out of the numerous buildings, which have come under public scrutiny, only two belonged to him personally.

The remaining ones that were catalogued actually belong to his son, Godfred Oquaye, and two of his stepsons Nana Kofi Aidoo and Nana Apeasam Aidoo, all currently domiciled in the United States of America.

Evidences abound that the actual construction of some of the houses started long before Oquaye was appointed Ghana' s High Commissioner to India, while the remaining ones were started by his sons, when he was serving the country in India.

Six months ago when 'The Chronicle' began its investigations, it came to light that the Ecomog House near Haatso, a suburb of Accra, belonged to his step-children Nana Kofi Aidoo, a senior officer in the US Army and Nana Peasam Aidoo, a computer analyst in a reputable company in USA.

During the undercover surveillance that took the paper several months, it was discovered that Mrs. Alberta Ocquaye, wife of the Minister, was personally supervising the construction of the house for her two sons residing in America.Indeed, Chronicle has undercover pictures of his wife inspecting the property. Construction of that building began in 1998.

In the interview the Prof who is a baptist Minister explained that Nana Kofi and Nana Apeasam requested that the house be redesigned into two-flat apartments to accommodate them and their families if they finally re-locate to Ghana.

It also came to light that the professor's wife, Alberta, who is a retired Army Major and daughter Asafo-Adjei, a renown lawyer had several houses at Kaneshie, Akoko Photo and in Kumasi long before she was married to her current husband.

Prof who has a very busy law firm which boats of a long list of Indian clients was so confident and so sure that his intentions were honourable that he never attempted to hde anything as he is a lawyer himself who knows tha full implications of his actions. It was lkearnt that yet another property at the Supermarket Junction near Haatso, belong to one of professor Ocquaye's sons, Godfred, a charted Banker working in USA. One fact is that the land on which the building is situated belongs to the professor, and part of it was leased to the Baptist Seminary adjacent to the building.

Enquiries established again that those vehicles were auctioned by the E.C.G. to a non-governmental organization, NGO, called Cottage Agro based at the Dome-Kwabenya The Chronicle has been invited by Cottage Agro on two occasions this year to cover the handing-over of 10 cornmills and 10 sewing machines to community based organizations and groups in the constituency to help in their income-generating activities.

When reached in his office at the Ministry, Ocquaye's first response to the paper's questions was that he was capable putting up those properties, but explained that it was only two of the properties listed that belonged to him.

According to the Energy Minister he had worked so hard and made several profitable investments, which could enable him put up any mansion of his choice.

He disclosed that he had practiced as a private legal practitioner since 1975 and was only called by the University of Ghana to come and help in 1984, which he referred to as a pure humanitarian gesture.

Prof. Ocqauye disclosed that the Haatso lands belonged to the Osu Stool, where his father comes from, and he as a lawyer provided all the legal assistance in their litigations against the chiefs of Ashongman and others.

He elaborated that based on the legal services he rendered to the chiefs and people of Haatso he was able to acquire a number of plots in and around the area.

According to him, before his entry into public service he was the lead solicitor for a number of major companies and also a founding director of UniBank Ghana Ltd, adding that he had since resigned his position after he became a minister.

Prof. Ocquaye further disclosed that he earned over a billion cedis annually on the sale of his book entitled, 'Politics in Ghana'. Apart from that he said he won the Rockefeller award in 1993 with a package of $30,000 and again won the Fullbright award, worth the same amount in1997.

The learned professor asserted that his families from Asamankese to Osu are property-owing ones, and as such his children who are in their late 30s and have lived in America for so many years are being encouraged to return into the country.

He concluded that notwithstanding his position as State Minister, he and his entire families would continue to acquire legitimate properties but he would never attempt to dip his hands into the state coffers r to acquire those properties.

The two houses, which The Chronicle established belonged to the Energy Minister included, his present residence. It is situated at Selase, near Agbogba and he had occupied it since 1981, Chronicle can say.