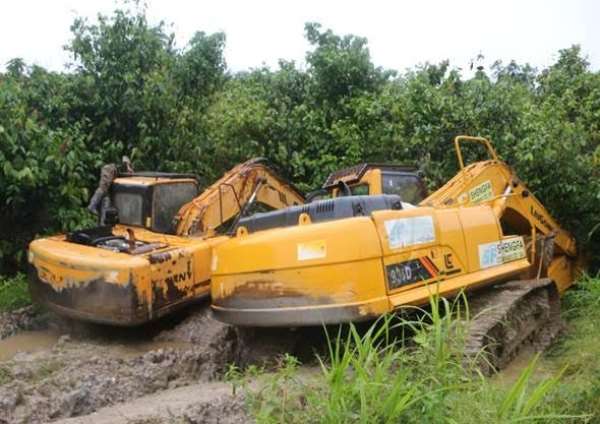 The Media Coalition Against Galamsey and OccupyGhana have tabled six questions it says government must provide answers to, on the vexed issue of galamsey.

According to a statement issued by the two bodies, their concerns follow revelations by Environment, Science, Technology and Innovation Minister, Professor Frimpong Boateng, that hundreds of seized Galamsey excavators have disappeared from District Assemblies around the country.

The groups said their ‘deep concern at this revelation stems from the fact that the authorities have simply once again failed to follow and enforce the law’ and that ‘The inability of the government to enforce the law, from the facts as we know them, is only matched by the brazenness of the illegal miners.”

“We have a number of questions for the government that require answers; and we respectfully demand those answers.”

First, under the 2006 Minerals and Mining Act, it is illegal for anyone to "erect equipment... for the purpose of mining" without being the holder of either a mining lease or a small-scale mining licence. Everyone who does this commits an offence. The government has to explain to Ghanaians whether the persons from whom the equipment was allegedly seized were also arrested. If that did not happen, the government should explain why it did not happen. Or, were the illegal miners also allowed to disappear just like the equipment?

Second, the law then provides that upon the arrest of illegal miners, the equipment they were using "shall, regardless of the ownership., be seized and kept in the custody of the police."

It is for very good reason that the law demands that the equipment should be kept by the police, and no other institution. The government therefore has to explain to Ghanaians why the equipment allegedly seized was kept with District Assemblies and not the police. Was this deliberate? Was this to make it very easy for the equipment to simply 'disappear'? Did anyone take an inventory of the seized equipment and if so where is that inventory? Which public officers were responsible for flouting the law?

Third, the Act demands that the arrested persons should be tried in court and then upon conviction, the court is empowered to "order the forfeiture of any equipment. seized." The government has to explain to Ghanaians whether the persons from whom the equipment was seized were duly prosecuted, and if not, why not? Without prosecution, the seized equipment cannot be forfeited in the manner the law demands. Are any prosecutions still taking place? If so, have there been any convictions? And if so, did the courts order forfeiture? Is the government able to publish a report on these matters?

Fourth, the Act provides that within 60 days of the confiscation, the Minister for Mines shall "allocate the equipment... to the appropriate state institution and publish in the Gazette the name of the state institution to which the equipment. is allocated." We do not need to ask this question because it is pretty obvious to all of us that this has not happened.

Fifth, the Roadmap For Lifting of Ban on Artisanal & Small Scale Mining & the Way Forward policy document says in section 3.2.1 bullet 3 that there shall be a "Directive by the Government/IMCIM to move all earth moving mining equipment for artisanal and small-scale mining to designated areas for subsequent registration and installation of tracking devices. This will be done under the direct supervision of the Regional Ministers prior to the vetting of artisanal and small-scale mining companies". Obviously from the statement of the Minister this directive has not been implemented.

Also, section 3.2.5 states that "The Minerals Commission in collaboration with the Driver and Vehicle Licensing Agency (DVLA) have been tasked to register and install tracking devices on earth moving equipment to ensure that the use of equipment at inappropriate locations are monitored and reported. A committee was formed to deal with the registration and installation of tracking device on the earth moving mining equipment." Has this provision been implemented? If it had, these excavators would have been registered and could be tracked making it impossible for them to be stolen. Can the government explain to Ghanaians why this has not happened?

And, sixth, we also need to know from the government whether all existing mining leases and small-scale licences have now been submitted to Parliament for ratification as is required under both the Constitution and the Minerals and Mining Act.

According to the two groups, per the above and the revelation by the Minister, government should be even more unhappy, especially if with all the power and force at its disposal, it is unwilling to or incapable of implementing and enforcing its own laws.

It said should that be the reality, then it gives a signal to potential wrongdoers that Ghanaians have no respect for the rule of law and that "it is just something we mention to others to make us feel good. That is why the nation is still under brazen attack from illegal miners."

"They know that we make noise and even deploy our military, but we have no teeth to bite. Nowhere is this more evident than the blatant illegal mining at the place called "Dollar Power," and the apparent inability or unpreparedness of the government to enforce the law there. This and the impunity it connotes should be a scar on our conscience.

"We are therefore not surprised that the War Against Galamsey is generally accepted to be failing. Operation Vanguard has all but petered out. That is unacceptable. We call on the government to shake itself out of its stupor and enforce the mining law without fear or favour. We also call on the media and civil society organizations to reawaken, hold leadership to account and reinvigorate the #StopGalamsey war.

"Losing this war is not an option. Irresponsible and unsustainable mining is an existential threat and should not be countenanced."