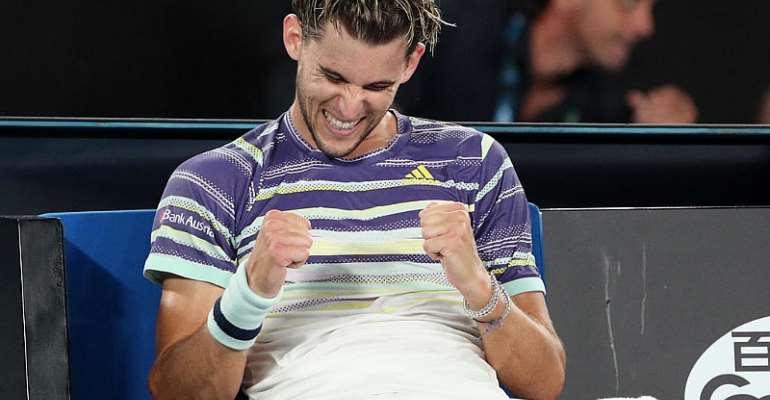 Dominic Thiem edged past Rafael Nadal in four sets on Wednesday to reach the semi-final at the Australian Open for the first time. The 26-year-old Austrian beat the top seed 7-6, 7-6, 4-6, 7-6 in just over four hours of high quality tennis.

It was the fifth seed's first victory over the Spaniard over the best of five sets at a Grand Slam tournament.

"I lost an opportunity to be in the semi-finals of another Grand Slam," said Nadal who squandered a set point in the opening set.

"But I lost against a great opponent. And he deserved it, too. Well done for him."

Thiem enjoyed copious amounts of luck. None more so than at 6-6 in the fourth set tiebreak. Nadal's backhand approach shot appeared to have pinned Thiem in the corner but his backhand cross court clipped the net and landed in to give him a 7-6 lead and a third match point.

Marathon
He wrapped up the encounter moments later when a Nadal forehand slumped into the net.

“All the match was on a very good level, we both were in great form, that's what can happen with two players in that form,” said Thiem.

“I felt I was lucky in the right situations. It's necessary as Rafa's one of the greatest of all times, one of the biggest legends in this sport, so you need a little luck to beat him.”

First
Thiem will play 22-year-old Alex Zverev on Friday in the semi-final after the German dispatched the 2014 champion Stan Wawrinka in four sets to reach the last four at a major for the first time.

The winner of that clash on Friday will play either the third seed Roger Federer or the defending champion Novak Djokovic.

It will be the 50th encounter between the two men. Djokovic has won 26 of the meetings and victory will give him a chance of adding an eighth Australian Open crown to his trophy cabinet.