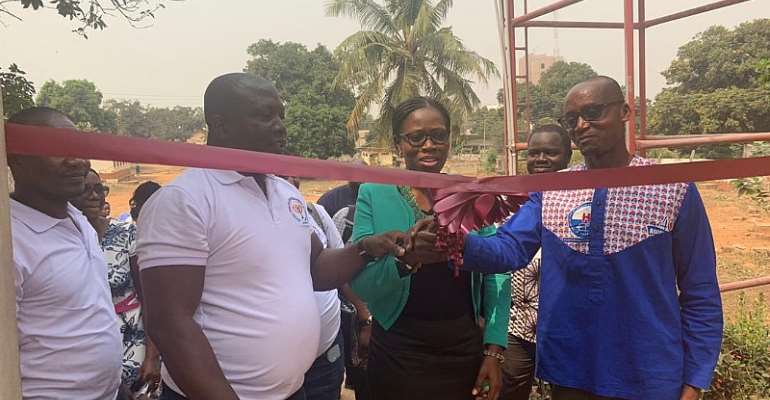 The Australian High Commission in Ghana has collaborated with a Ghanaian non-governmental organization to renovate the VIP ward of the Accra Psychiatric hospital.

The Mental Health and Well-Being Foundation (MHWF) in collaboration with the Australian High Commission presented a cheque of Ghc74,453.00 as part payment for the project to begin.

Speaking at a short ceremony in Accra for works to begin, Program Manager for the Commission, Jennifer Burckson said the project would cost the commission 38,914 Australian dollars and expected to be completed in three months times.

According to her, the decision to renovate the VIP facility was arrived at after careful deliberations with the hospital authorities.

She added that the authorities provided them with a list of facilities that were top priority.

According to her, the Commission decided to undertake the project after the hospital put in a request for assistance in renovating their facilities.

The Australian High Commission last year commissioned six modern toilets and five bathrooms after the previous one was in a state of disrepair.

She added that the commission is committed to supporting mental health care in Ghana and will continue to partner institutions to provide quality health care for Ghanaians.

Hospital Administrator on why they chose VIP ward to be renovated

According to Julius Kuusaalesuo, hospital authorities chose the VIP ward because it hard high patronage up until the facility deteriorated.

Mr. Kuusaalesuo said even though patrons of the VIP ward paid extra charges, monies could not be used to maintain the facility because revenue gained had to be channeled into the upkeep of the hospital.

“This is a hospital that has a lot of needs so when you collect the funds, there are other urgent needs that you need to use the funds for so over the period we have not been able to maintain its status that is why there is the need to renovate” – he said

Families leaving their wards after treatment

The hospital administrator also lamented the ordeal they go through for families to come for their wards after they have been treated at the facility.

According to him, there are patients who have had to live in the hospital for over 30 years because their families have abandoned them after their treatment and the hospital has no option than to house and care for such persons.

She added that the foundation will continue to support healthcare in Ghana indicating that other projects were underway in the Volta region.