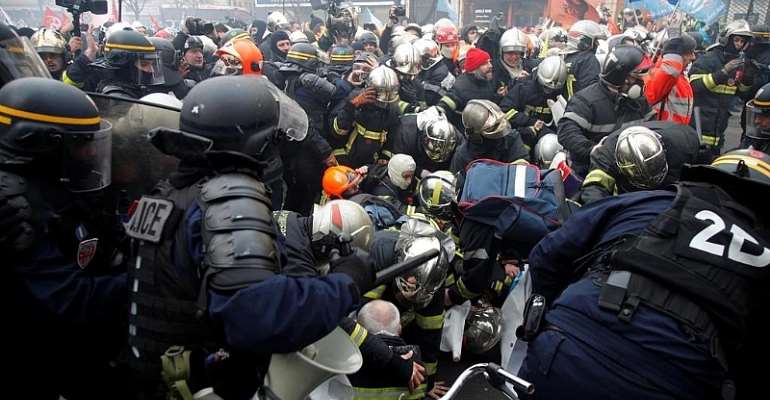 A French police officer was seriously injured on Tuesday during clashes between riot police and firefighters demanding better pay. Paris police chief Didier Lallement condemned the violence during a hospital visit to the patient.

The first signs of trouble emerged Tuesday when firefighters tried to block traffic on the inner ring road of Porte de Bagnolet in the east of Paris, sparking rebuke from the prefecture's office on social media for not respecting the agreed protest route.

The itinerary for Tuesday's protest, attended by thousands of firefighters, was planned for Avenue de la République to Nation in central Paris.

However, before reaching the route's end, scuffles broke out between demonstrators and riot police, who fired teargas and used batons.

Videos of the clashes went viral on social media adding pressure on the government over French police tactics of crowd control.

Hit by bomb
On Wednesday, French media reported that a police officer had been seriously injured in the foot after being hit by a homemade bomb. He was later transported to a nearby hospital.

Lallement, who expressed his support to the officers and gendarmes deployed during the protest, issued a press release condemning the violence.

Mortar shells also burnt two other officers during the clashes, according to the Unité SGP police union.

Firefighters are demanding better pay and conditions, including an increase in their hazard bonus, which has not changed since 1990.

Dressed in uniform, in defiance of a police ban, some set their uniforms alight as a symbolic gesture before colleagues put out the fires.

In October, firefighters also protested in Paris, calling for better pay, guarantees of their pension benefits and greater respect for their profession.