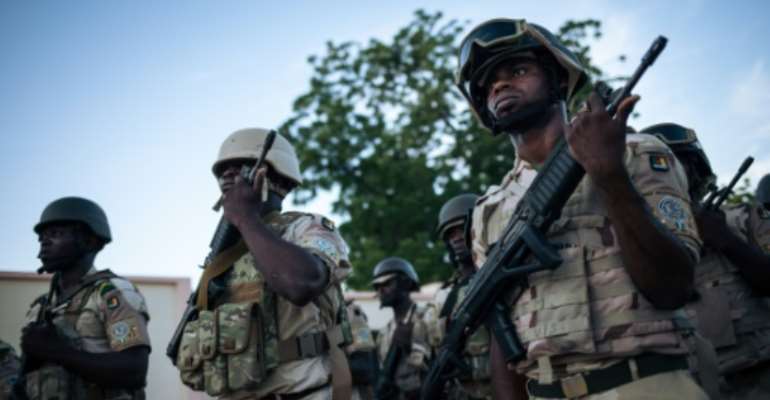 Cameroon forces have been fighting Boko Haram militants in the north. By ALEXIS HUGUET (AFP)

Five people were killed in an overnight attack in north Cameroon by Boko Haram jihadists who were hunting for soldiers in a village near Lake Chad.

Based in neighbouring Nigeria, Boko Haram has stepped up attacks from bases hidden in the vast Lake Chad area, where the borders of Cameroon, Chad, Niger and Nigeria converge.

"Five civilians were killed by Boko Haram in Blaram," a village in the Blangoua district of Cameroon's Far North region, a local official said.

The toll was confirmed to AFP by an army officer in the region.

Two soldiers were also injured in the assault and a military base set on fire, the officer said.

"Boko Haram fighters attacked the post around 1am. Fighting erupted between them and the soldiers, but the troops made a strategic retreat because they were outnumbered," a Blangoua district official said.

The civilians were killed in their homes by attackers searching for soldiers, the official said.

The village of Blaram is located on dry land near Lake Chad.

Cameroon says the group has carried out nearly 13,000 attacks on its territory since 2014, with the loss of "several thousand" lives.

The insurgency has forced more than 250,000 people to flee their homes and triggered an influx of 60,000 people from Nigeria.

Boko Haram was formed in Nigeria but attacks have spread to neighbouring countries. The group has also split and a faction affiliated with the Islamic State group, ISWAP, is particularly active around Lake Chad.

Neighbouring Chad has also seen a rise in militant violence.

On Monday, six Chadian soldiers were killed in an ambush on the island of Tetewa. Earlier this month, a suicide bomber detonated her explosive belt in Kaiga Kindjiria village, killing nine civilians.

Since 2015, the countries of the region have been fighting against Boko Haram and ISWAP as part of the Multinational Joint Force (FMM), a regional coalition engaged around Lake Chad with the help of local resident groups.

This month, 1,200 Chadian troops who were deployed for months in Nigeria returned to Chad to be redeployed on the edges of the Lake, on the Chad side, due to the growing risk of attacks.

The rising violence has deteriorated the humanitarian situation around the lake, which is considered one of the poorest regions in the world.