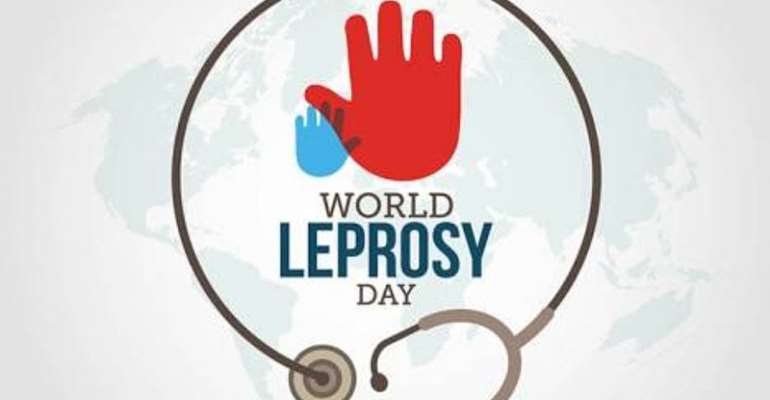 This year’s World Leprosy Day was marked last Sunday at the Ankaful Leprosy and General Hospital.

The occasion used to allay fears that leprosy was a highly infectious disease.

The day was commemorated on the theme: “Overturning the stigma of leprosy.” World Leprosy Day is observed around the world annually on the last Sunday of January.

The Specialist in charge of the facility, Dr Benedict Okoe Quao, in his address, stated that contrary to the long-held notion that leprosy was highly infectious, 95 per cent of all persons exposed to leprosy would not be infected because of their immunity.

“For the five per cent who will develop the disease, it may take averagely two to five years, and potentially even up to 20 years for the disease which is frequently seen as a harmless patch that can be mistaken for a birthmark or fungal skin infection,” he stated.

However, he said, it was impossible to predict the five per cent who would contract the disease, saying considering that leprosy was spread by droplets through sneezing, coughing, shouting and singing, anyone could contract it.

Dr Quao stated that Ghana had long eliminated leprosy as a public health problem, saying the prevalence rate was currently below one case per 10,000 population.

“Just like in many parts of the world, we continue to record new cases, some persons are still diagnosed with visible deformity already developed and there is still evidence of leprosy-related stigma,” he noted and called for more governmental support to reach true zero.

Early detection
Dr Quao gave an assurance that the Ghana Health Service would continue to work to curb leprosy transmission, detect cases before the onset of disability and prevent the development of new disability after diagnosis.

In an address read on his behalf, the Central Regional Minister, Mr Kwamena Duncan, said the greatest resource of every nation was the health of its people.

He said the government was aware of the difficult conditions paramedics faced in the discharge of their duties and gave an assurance that the government would continue to resource the health sector to enable them to offer the best of services.

Stigma
Mr Duncan expressed worry over the continuous stigmatisation of persons infected with leprosy and urged people to treat them with dignity.

He said the regional coordinating council was prepared to work in collaboration with the management of the hospital to help achieve the purpose of reducing the stigmatisation attached to the disease.

The Municipal Director of Health Services for Komenda-Edina-Eguafo-Abrem, Ms Catherine Ampah Brain, stated that the district health directorate would work with the hospital to ensure early detection of cases, particularly in their catchment area and also advised patients to seek medical care when they detected any unusual skin disease.

She urged the hospital’s authorities to embark on outreach and public education to create more awareness of the disease which was curable when detected early.

Lepers Aid
Mr Patrick Annan, a representative from Lepers Aid called for active collaboration to fight for the well-being of those who were infected.

He urged the government to call on hospital authorities to provide quality services for patients who patronised their facilities.