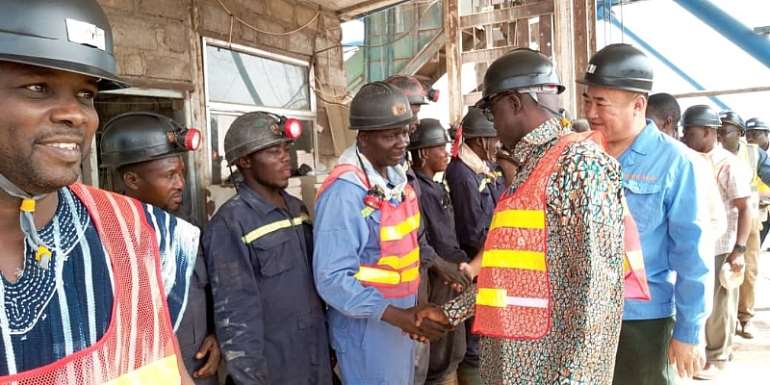 Minister for Lands and Natural Resources interacting with miners at Gbane

Minister for Lands and Natural Resources, Kwaku Asomah-Cheremeh has issued a stern warning to persons embarking on “galamasey” in the Talensi District and in the Upper East Region and other mining areas in the country.

He ask them to desist and rather use the right approach for mining, if they are interested in operating in the mining sector.

Even though the minister did not mention the exact punishment that would be given to such persons when caught, he hinted that the punishment would be very severe and would have a lot of consequence on offenders.

“We have done a lot of education; opportunities have been given for people to regularize their operations and so much has been done to discourage people from doing illegal mining. We are working to sanitize the sector and so if there is anyone who does not want to do what is right and that person is apprehended, the laws will be applied; if someone is arrested for getting involved in illegal mining, the minimum punishment is about 15 years imprisonment and 25 years maximum,” he said.

The Minister for Lands and Natural Resources was speaking at Gbane, in the Talensi District, when he paid a working visit to the office of Shaanxi Ghana Limited, which was providing mining support service for Nyeyeya and Pubortaba Mining Groups in the area.

The minister also inspected works and structures put in place by Shaanxi Mining Ghana Limited to improve on the safety of the workers at the mining site, especially the underground miners.

Earlier the Chief Executive Officer of Shaanxi Mining Ghana Limited, Wei Xing, through an interpreter complained that, some illegal miners kept creating unapproved underground tunnels to enter its underground area to steal ore and also altered some of its underground structures.

“Some people have been entering our concession through some illegal mining pits and this is a worry to us. Their activities are a big challenge to all the effort we are making to improve on our safety measure and to curb accidents in our operations here. Some of the pits that were sealed on the directive of government, have been opened and being used to frustrate our work.”

The Public Relations Officer of Shaanxi, Maxwell Woomah told the media that some persons had been arrested and handed over to the police for entering Shaanxi’s underground area through an illegal pit to steal and destabilize its underground structures.