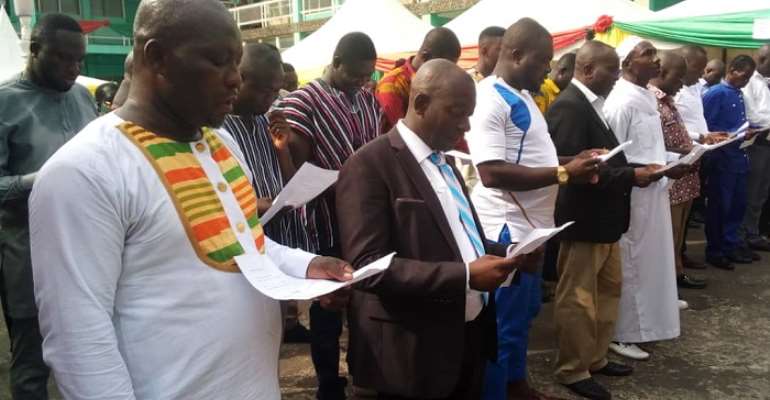 Some of the newly elected assembly members

The Metropolitan Chief Executive (MCE) for Sekondi-Takoradi, Kobina Kurentsir Sam has said the job of an assembly member is sacrificial to humanity.

He has therefore charged the newly elected assembly members to see it as such and work hard for the people and the nation.

He added that when the various district assemblies were served by dedicated individuals who demanded accountability, the credibility of the assembly would be assured in respect of its decision making and service delivery to the people.

The MCE, popularly called 'K.K Sam' stated this at the inauguration of the 8th Sekondi-Takoradi Metropolitan Assembly (STMA) in Sekondi on Thursday.

“Your community members expect you to carry information from them to the General Assembly and to report back to them as well on decisions taken by the assembly,” he told the assembly members.

He continued “as newly elected assembly members, I will urge you to come up with realistic strategies in collaboration with the management of the assembly to generate adequate revenue to complement the effort of the central government.”

He called on the assembly members to put premium on sanitation and waste management activities to rid their communities of filth and other related problems associated with insanitary conditions.

He indicated that the success of the STMA hugely depended on the level of co-operation extended to the MCE as well as other management staff in the discharge of their functions as members of the assembly.

“It is my fervent hope that we would work in unison as a corporate entity with a common goal for the development of STMA,” he said.

The Minister for Works and Housing, Atta Akyea told the assembly members that their election has marked the confidence the people of the various communities had in them.

He, among other things, called on them to give the necessary support to the assembly in enforcing its bylaws on sanitation to ensure clean and healthy environment in their respective communities.