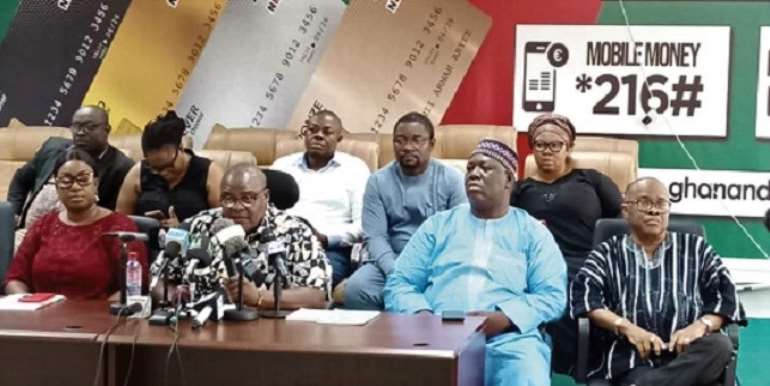 Mr Kakra Essamuah (2nd left) addressing the media. With him are some executive of the NDC

The opposition National Democratic Congress (NDC) say it will from next week begin series of activities across the country to register its displeasure over the “harassment and unlawful arrest” of the national communications officer of the party, Mr Samuel Gyamfi last Monday.

Addressing the media at a briefing in Accra, the Director of Communications of the party, Mr Kakra Essamuah said the NDC will protest the “needless show of excessive power” which is targeted at its officers.

Mr Essamuah said the NDC had credible intelligence that the arrest of Mr Gyamfi was part of a larger scheme of intimidation and harassment calculated at breaking the front of the party and force its members to cow into silence in the run up to the 2020 election.

He explained that the Executive Secretary to the President, Nana Asante Bediatuo, had lodged a complaint against Mr Gyamfi over some alleged cyber crime which the party believed was only a decoy to break the resolve of the outspoken national communications officer of the NDC.

“We are in no doubt that this charge is trumped up and designed as retribution against our courageous officer because he (Nana Asante Bediatuo) had hoped that the fact of his nuclear family being members of the Akufo-Addo’s government will remain hidden,” he said.

He said the arrest of Mr Gyamfi was unlawful because the charges against him were not new and that the matter was already in court pending trial.

“Settled law clearly establishes that the pendency of these cases prevent the police from taking any further action against Mr Gyamfi until the parties have been heard or until the police managed to set them aside through due process,” he said.

Mr Essamuah said some police officers in the country were being used to execute the harassment and intimidating agenda of the government against officers of the party in clear violation of their professional code of ethics.

“Some elements within the Ghana Police Service who should otherwise act professionally have allowed themselves to be used as tools in the execution of this sinister agenda of hate and harassment against opponents and critics of the President,” he said.

He said the NDC was reminding the police that they were not “appendages” of the government and must ,therefore, not act as such.

Mr Essamuah noted that the New Patriotic Party (NPP) was sensing defeat in the upcoming elections in December and had only resorted to unconventional methods and tactics targeted at its opponents in a bid to render them helpless before the elections.

“Sensing a humiliating defeat in the elections because of the pronounced maladministration characterised by massive corruption, unprecedented levels of nepotism, excruciating economic hardships, arrogance and waste of public resources through ostentation, the government has resorted to these discredited tactics to stay afloat,” he said.

MMDCEs race: 18 file for appointment in Sissala East and Wes...
44 minutes ago

Akufo-Addo fly to Paris
50 minutes ago