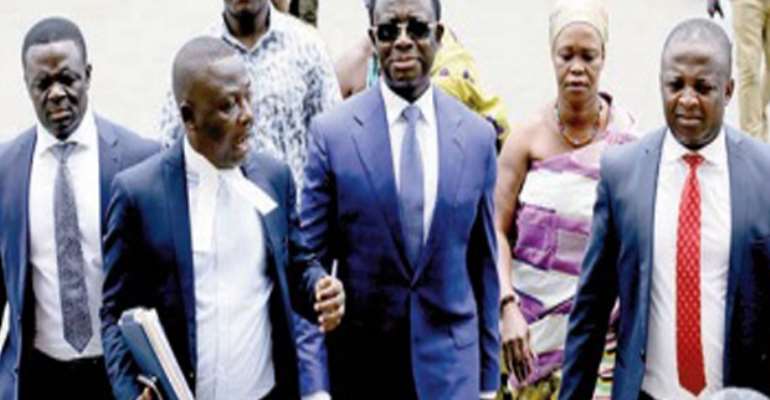 Attempts by lawyer for the embattled former Chief Executive Officer (CEO) of Ghana Cocoa Board (COCOBOD), Dr. Stephen Opuni, to cite a witness for perjury has been denied by an Accra High Court.

Samuel Cudjoe, counsel for Dr. Opuni, who is standing trial alongside businessman Seidu Agongo in the Lithovit fertilizer case, had filed the application last year, seeking to cite the third prosecution witness in the case, Dr. Yaw Adu-Ampomah, for perjury.

According to Dr. Opuni's counsel, portions of the evidence given by the witness in the trial were inaccurate and must suffer the penalty for it.

Dr. Opuni and Seidu Agongo are being tried on charges of causing financial loss to the state, money laundering, among others.

The witness had told the court about how COCOBOD placed advertisement in the media for competitive tender biddings but later said fertilizers are purchased through sole sourcing.

It is this piece of evidence Dr. Opuni's lawyer claims is false and, therefore, wants the witness who is a former deputy CEO in charge of Agronomy and Quality Control at COCOBOD to be convicted and possibly sent to prison for perjury.

The lawyer was expected to move the application yesterday but the court, presided over by Justice Clemence Honyenuga of the Court of Appeal, stopped the move saying he wanted to make an assessment of the situation.

In his ruling, Justice Honyenuga held that it would be prejudicial to 'consider' the application and give a judgment on it when the trial is still ongoing.

Citing some past cases, he said in the interest of fairness and justice and given that it is a summary trial, it would be prudent to determine the case before the application is considered.

He added that in the event that the accused persons are convicted, they can appeal based on the purported prejudicial statement the witness is being accused of.

The motion was, therefore, adjourned sine die (indefinitely) by the court.

Dr. Opuni and Seidu Agongo, Managing Director of Agricult Ghana Limited, are before an Accra High Court for causing financial loss to the state to the tune of GH¢217,370,289.22.

The two are facing a total of 27 charges, including defrauding by false pretence, willfully causing financial loss to the state, money laundering, corruption by a public officer and contravention of the Public Procurement Act.

The two are in court over the purchase and supply of Lithovit fertilizer which the state said was done in contravention of several laws.

The prosecution has maintained that the fertilizer tested and approved with certificate was a solid substance but the defence insisted it was in a liquid form.

The third prosecution witness, Dr. Yaw Adu-Ampomah, mounted the witness box in May last year and has been under cross-examination by counsel for Dr. Opuni ever since.

In the course of the evidence given by the witness, there have been a number of interlocutory applications filed before the trial court, the Court of Appeal and the Supreme Court by Dr. Opuni, all seeking to put the trial on hold.