Accessibility Of The Fanfare Ambulance 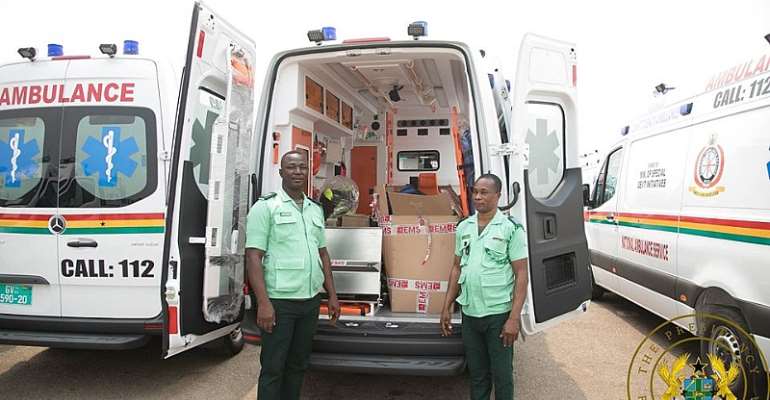 28th of January, 2020 marks deliberate day in the history of this country. Despite any hindrances faced by the Ghana ambulance service prior to the public show of the 307 ambulances in Accra, I see it a necessity giving thanks to the President of the Republic of Ghana, H. E Nana Addo for ensuring that this didn't amount to his many unfulfilled promises even though it is yet to be proven as one of the failed executed ones or otherwise.

I also wish to be convinced that the qualities attributed to the ambulances were not just the normal conation and rhyming of words as usually conjured and voiced with cacophony to grasp the attention of Ghanaians. If only I heard my lovely President right, these ambulances came with improved features including tracking devices that enhance easy navigation and location of nearest hospitals and other EMTs. A new shortcode was launched by the golden old man to ease the calling of the nearest centers of the ambulance service.

Usual of this President, he praised the efforts of the Kufuor administration for instituting the Ghana ambulance service but in his usual political arrogance, ignored the 81 percent coverage nationwide that the Mills to Mahama administration chalked during their time. It is quite surprising and politically unconvincing to underrate the efforts of one's predecessor in leadership roles. As a leader, who they precede from is key to their decisions and who they hand to is genuine for continuity.

To the substantive matter of this write-up, the biggest question is how are these ambulances so jubilated about going to be accessible to people living in places without network coverages or how are the tracking devices going to be functional in responding to cases in such communities without network coverage? This may sound funny but the story of people in some parts of Ghana is ordeal if I can describe it. In communities like Jentige, Chache, Maaluwe, Dakurupe, Sonyo in the savannah region one key problem of them is the no the network coverage which has eased the escape of armed robbers any time they attack people along the roads leading to these communities. Calling the police is not possible in times of these challenges.

With this scenario, it is simple that the very people that were bused to Accra to witness the commissioning of the ambulances who definitely will have the opportunity to take their share of the national cake by taking part in the fanfare that H.E Nana Addo organized for his party people. To appreciate what people in these areas, go through, the President should have used the money wasted on the commissioning program to erect network masks in a number of communities to connect them to the Ghana communication networks. As a result of this challenge of no network, communities have resorted to the use of tricycles popularly known as ‘aboboya’ as ambulance to carry women in labor, people involved in accidents or those attacked by deadly diseases.

This often times lead to unexpected deaths due to delay and condition in which such patients are carried to the nearest health facilities.

It was this idea that led to the massive construction of CHPSS compounds across the length and breadth of Ghana to at least augment the work of the ambulances in the district capitals. The impact of these rural health facilities cannot to down placed.

When a toddler takes a step, he feels at home and proud thinking that is the best not knowing the best is to walk straight without warbling. Here is a Government that is handicapped in fulfilling its lucrative promises and has robbed peter to pay Paul, by increasing our debt stock to 200 billion in 2019 from 112 billion in 2016. This shows that Ghana is going nowhere with this character of always spending.

We have missed something and that is the roads on which many accidents occur through which the ambulances are relevant. The roads in our country are too bad that road accidents are on the increase. It will not surprise me if ambulances get accidents moving along of the main roads. The Bole-Bamboi road, Bole-Wa road and the Sawla-Fufulso road are in a bad shape that need the attention of the ministry of highways.

If wet grasses are burning, then the dry ones will escalate the fire. Roads to villages are left unconstructed and we expect them to benefit the same ambulance as those in towns?

As a country, it is time our policies are business policies that generate money for the country. For example, the construction of the Bole-Chache road will boast income generation for the Government since it is a border line.