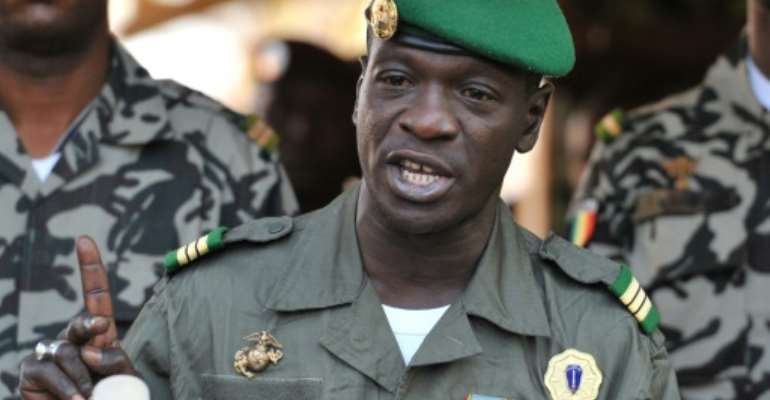 Former coup leader Amadou Sanogo was freed from detention in Mali on Tuesday, casting doubt on whether a case involving the massacre of 21 soldiers will be resolved.

A smiling Sanogo left prison in silence, after a court in the capital Bamako had ordered his provisional release.

A former army captain, Sanogo and several other plotters had staged a military coup against President Amadou Toumani Toure in the West African country in 2012, after rebels took control of the country's north.

But the junta led by Sanogo stepped aside under international pressure after critical northern cities such as Timbuktu and Gao fell to the rebels.

Sanogo was then held for six years on charges of killing 21 soldiers who opposed the putsch.

The rebellion in the north has since been taken over by jihadists, who have spread violence to central Mali as well as neighbouring Burkina Faso and Niger.

Malian and foreign troops have been struggling to quell the revolt, and there are calls to find a political solution to the deepening crisis.

Twelve other former military members linked to the case were also freed.

Rights groups, however, have expressed concerns that the release will lead to a politically-motivated amnesty for the accused while the country is at war.

The trial stalled after it began in 2016, but was expected to resume this month.

The proceedings were expected to provoke political discomfort.

Defence Minister Ibrahima Dahirou Dembele, who served as army chief of staff under Sanogo's junta, for example, was set to take the stand.

Sanogo and 16 others first went on trial after they were accused of abducting and killing 21 elite "Red Berets" in 2012.

The "Red Berets" had been accused of involvement in a counter-coup against Sanogo and his loyalists. Their bodies were found in a mass grave in 2013.

Demebele was implicated in the massacre although, unlike Sanogo, he was not detained.

As deadly militant attacks rise across Mali, the case has threatened to shine an unwelcome light on the minister who is now considered a linchpin in the anti-jihadist fight.

Officially, the trial is ongoing but there is no clarity about the next steps.

Cheik Oumar Konare, one of Sanogo's lawyers, told AFP that the court had "only ruled on the release" and not on the defendants' responsibility.

Still, Konare said that "justice (was) done" since his client Sanogo had spent six years in pre-trial detention.

An official close to the government, who declined to be named, said that Sanogo "had the right" to go free since he had been held for years without being judged.

The official added that the provisional release should be seen "as a way not to destabilise our defence".

The original case from 2016 stalled after the defence rejected a forensic analysis of the remains of the 21 "Red Berets". Dembele had not been named defence minister at time.

A new hearing was set for January 13 and Dembele -- who was appointed as defence minister in 2019 -- had offered his resignation, according to local media.

But Mali's government postponed the trial again, citing the need to maintain "the cohesion of the armed forces".

The official close to the government said it was not possible for Dembele to resign because "he is currently a key element in our military posture in the fight against terrorism".

Amnesty International and the International Federation for Human Rights have expressed concern that defendants may now be granted clemency under a controversial reconciliation law adopted last year.

'We urge the authorities in Mali to ensure all serious human rights violations are investigated and prosecuted, and to respect victims' right to truth and justice and the accused's right to a fair trial,' Amnesty International said.