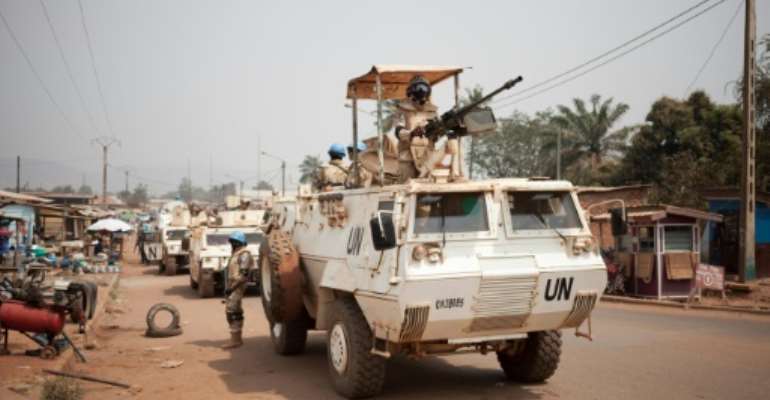 UN peacekeeping forces have been mediating in the recent clashes. By FLORENT VERGNES (AFP)

More than two-thirds of the former French colony lies in the hands of armed groups, who typically claim ethnic or religious affiliations and often fight over mineral resources.

"There are about 50 dead. Some bodies were immediately buried by relatives, so it is difficult to give a precise figure," said the prefect of Haute-Kotto department, Evariste Binguinidji.

After mediation with UN peacekeeping forces sent to the area, "the town is calm. The armed groups have withdrawn their men from the town centre and displaced people have started to return," he said.

"My parents' house was burnt down," said a taxi driver who gave his name as Mahamat.

"They have taken shelter in the Fulani quarter," he told AFP, speaking over the telephone.

"Now things are better. People have started returning to the main market to shop."

The clashes are the latest test to a nearly year-old agreement aimed at bringing peace to the CAR.

Deeply poor despite its mineral wealth, the CAR has been in the grip of militia violence since 2013.

Bria is the main town in a diamond-rich region. It has been ravaged by long-standing violence and parts of it are pockmarked or in ruins.

Violence erupted there at the weekend between "ethnic groups", the spokesman for the UN peacekeeping force in CAR, Vladimir Monteiro said on Sunday.

It followed a local split several months ago within a militia called the Popular Front for the Rebirth of the Central African Republic (FPRC), several sources in Bria said.

On one side are members of the Runga ethnic group, including the FPRC's military chief Abdoulaye Hissene and several of his officers, and local members of the Gula and Kara groups on the other, they said.

"The Gula and Kara alliance has taken over almost all of the town. There are bodies in all the streets. The town centre is empty. All the Runga have fled," an aid worker contacted by AFP on Sunday said.

"The Gula control many of the mines around Bria," a local diamond merchant said.

"But in town, most of the diamond outlets belong to the Runga. They are traders who have established solid connections with foreign buyers, especially the Lebanese and Indians. This is one of the main reasons for the tensions."

The head of the CAR Red Cross, Antoine Mbaobogo, said the figure of around 50 dead given by the prefect "seems credible to me."

As of Monday, there had been a toll of 35 dead and 17 wounded, Mbaobogo told AFP.

Violence flared last week at Birao, a key town in the northeast straddling the road to neighbouring Sudan, between the FPRC and a group called the Movement of Central African Liberators for Justice (MLCJ), which is mainly drawn from the Kara community.

Both groups had joined other militias in Khartoum last February 6 to sign a peace agreement with the government.

The deal reduced, but did not end, the country's chronic violence.

More than a quarter of the CAR's population have fled their homes since the start of the civil conflict in 2013.