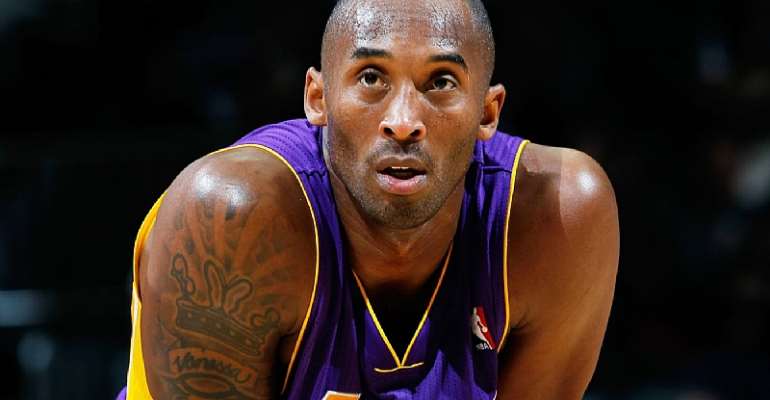 KOBE BRYANT played basketball as if he was a bat. But a bat with eyes.

In other words, he could watch where he was going, but at the same time, he could sense who was behind, or coming towards him, from his side. As if he had clothed himself with invisible radar SENSORS that told him who was coming to attack him – and from which side – as he leaped towards the basket.

As he catapulted high in the air to “dunk” the ball, he would simultaneously writhe his body and contort it into positions that enabled it to elude any blocking contact with the bodies of players attempting to deflect the trajectory of his leap and the inevitable throw-in action of his hands.

Having successfully dunked the ball in miraculous flash movements, he would look at the crowd yelling in delight, then twist around and look his opponents up and down, a grin on his handsome face.

If he was in Ghana, that look would amount to an insolent, silent, ungrammatical question: “Can you me?”

Of course, this attitude convinced opponents that not only did Bryant seem cocky; Bryant WAS cocky!

And who wouldn't be, if he was as beautiful on the court as Kobe was? Who could be modest and still pack bags of playing talent, as Kobe Bryant did?

Yeah -- if you could make your body do unbelievable things in the air above the basketball court; or on the slippery foothold of the court floor; if, in spite of the hazards, you could score EIGHTY-ONE POINTS IN ONE GAME! (a score that some whole teams struggle to achieve in a whole night's game!) would you need to play at being cocky? It would come naturally, wouldn't it?.

Bryant didn't just dazzle on the basketball court, he was able to meld his talent into a team that won FIVE NBA championships in his 20-year career. He also won TWO Olympic gold medals. He became the NBA's Number Three All-time Scorer -- up till one day before he died – when he was lost 3rd position by the new basketball King, LeBron James.

Kobe Bryant was indeed a basketball genius, and sad was all basketball fans to learn that his life had been snuffed out in a helicopter crash on Sunday, 26 January 2020. He was only 41 years old, and had retired from basketball only four years earlier; in 2016.

A keen enthusiast in passing on his knowledge to the coming generation of basketball players, he was on his way to take part in practice games (in which he took part in tutoring his 13-year-old daughter, Gianna)

when the helicopter in which they were traveling with seven other people (all connected with aspects of Gianna's basketball training) smashed into a hillside and crashed. There were no survivors.

Investigations were going on to try and establish the cause of the helicopter crash when this was written. But early indications pointed to weather-related issues. There was a thick fog that morning, so why did the helicopter pilot choose to fly? He's taken the answer to the grave.

The Los Angeles Times newspaper specified that “After taking off in Orange County, the helicopter flew northwest and then crashed ... near Las Virgenes Road, south of the 101 Freeway, in Calabasas.”

The helicopter, a Sikorsky S-76B built-in 1991, departed from John Wayne Airport at 9:06 a.m. on Sunday, 26 January 2020, according to publicly available flight records.

The LATIMES said “The crash occurred shortly before 10 a.m.[on Sunday] near Las Virgenes Road and Willow Glen Street in Calabasas. Authorities received a 911 call at 9:47 a.m., and firefighters arrived to find that the crash had ignited a quarter-acre brush fire in steep terrain”.

The Federal Aviation Administration (FAA) and the National Transportation Safety Board (NTSB) were investigating the crash (the paper added.) It revealed that the NTSB database did not show any prior incidents or accidents for the aircraft, thus strengthening the belief of many that the accident was caused by pilot misjudgment. (The helicopter’s manufacturer, Sikorsky, has said in a statement that it would be "cooperating" with the investigation.

In the meantime, it has been established that the fog was severe enough, on that Sunday morning, for the Los Angeles Police Department’s Air Support Division to ground its own helicopters. It didn’t fly until later in the afternoon, a department spokesman said. “The weather situation did not meet our minimum standards for flying, The fog was enough that we were not flying.”

(The LAPD’s flight minimums are 2 miles of visibility and an 800-foot cloud ceiling) .The L.A. County Sheriff’s Department also made a similar assessment about the fog, disclosing that and it "had no helicopters in the air [that] morning – basically because of the weather,”

Kurt Deetz, a former pilot for the company that operated the helicopter, and who, himself, used to fly Bryant in the chopper was quoted as confirming that weather conditions were poor in Van Nuys on Sunday morning — “not good at all.” The crash was more likely caused by bad weather than engine or mechanical issues, he maintained. “The likelihood of a catastrophic twin-engine failure on that aircraft — it just doesn’t happen,” he added.

Kobe Bryant is survived by his wife, Vanessa, and by three of his daughters. Tributes have been pouring in, to comfort the family and Bryant's millions of fans. In a statement, Bryant's long-time friend, perhaps the most famous NBA player of all time, Michael Jordan, said:

"I am in shock over the tragic news of Kobe's and Gianna's passing. Words can't describe the pain I'm feeling. I loved Kobe - he was like a little brother to me. We used to talk often, and I will miss those conversations very much. He was a fierce competitor, one of the greats of the game and a creative force. Kobe was also an amazing dad who loved his family deeply - and took great pride in his daughter [Gianna's] love for the game of basketball. Yvette [Michael's wife] joins me in sending my deepest condolences to Vanessa, the [Los Angeles] Lakers organization and basketball fans around the world.”

Although Bryant played for the Los Angeles Lakers during his entire career, plenty of basketball fans in Chicago (whose loyalty is usually to the Chicago Bulls) nevertheless expressed dismay over the loss of Kobe, the NBA legend. Particularly difficult for fans was Kobe’s young age. At just 41, he was embarking on a new career as an entrepreneur, trying to build up teams of his own.

Bryant was born in Philadelphia. His father, Joe, played eight seasons in the 1970s and ’80s for the Philadelphia 76ers, San Diego Clippers and, in his last stop, the Houston Rockets. He played college ball at La Salle. He married Pam Cox, with whom he had Kobe. He was their first son and they named him Kobe, after the city in Japan. (Many suspect that Kobe might have been conceived there!)

Kobe Bryant excelled in basketball at Lower Merion High School in Ardmore, Pa., near Philadelphia, winning numerous national awards as a senior before announcing his intention to skip college and enter the NBA draft. He was selected 13th overall by the Charlotte Hornets in 1996. However, the Lakers had already worked out a deal with the Hornets to acquire Bryant, apparently, even before his selection!

As a 6-foot-6 guard, Bryant made his pro debut for the Lakers in the 1996-97 season opener, against Minnesota. He was the youngest player to appear in an NBA game.

Bryant and Lakers' then leading scorer. Shaquille O’Neal quickly morphed into one of the most lethal scoring and defensive combinations in the NBA league. Together (with coach Phil Jackson guiding them) they led the Lakers to three consecutive championships (2000-02).

“There are no words to express the pain I’m going through with this tragedy of losing my niece Gigi & my brother, Kobe” Shaquille O’Neal tweeted, after learning of Kobe's passing.

Rest in peace, oh Kobe! You have written yourself indelibly into many hearts in all parts of the world. And that's the best a human can do, really.