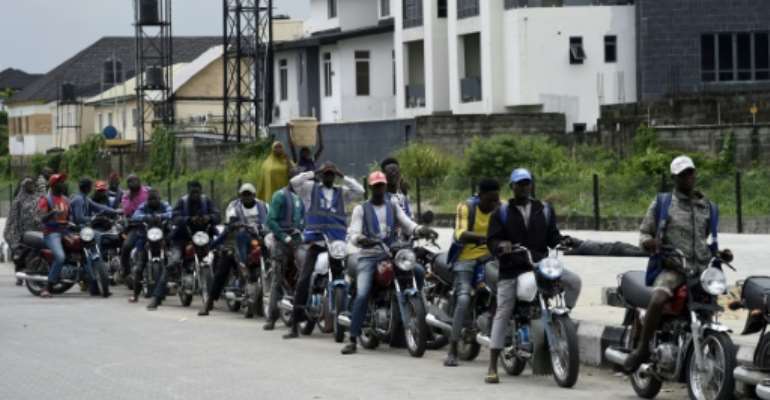 Nigeria's traffic-choked economic capital Lagos has announced sweeping bans on the motorbike taxis plying its perilous roads set to come in to force from next month.

The state government has barred motorbike taxis and motorised rickshaws, known locally as okada and keke, from swathes of the city over what officials described as "scary figures" for fatal accidents in recent years.

"Lagos State Government on Monday wielded the big stick against the menace of commercial motorcycles and tricycles," the authorities wrote on Twitter.

"The lack of regard for the Lagos traffic laws by the Okada and tricycle riders had resulted in preventable loss of lives."

The ban, which starts February 1, covers numerous central districts and suburbs of the chaotic megacity of 20 million people and major highways and bridges across Lagos state.

The ubiquitous motorbike taxis and rickshaws are seen as a vital -- if sometimes hazardous -- way for many Lagosians to negotiate the notorious "go-slow" traffic jams that clog the streets.

Motorists in one of Africa's biggest cities face an obstacle course of tailbacks and potholes that can turn the daily commute into an ordeal lasting hours.

The bikes also offer a key source of income for thousands of low-skilled young men living in the city where unemployment and the cost of living are high.

Many of the drivers are unregulated but a slew of ride hailing apps have sprung up that have improved oversight and safety controls in the sector.

Lagos authorities have previously sought to ban the two and three-wheelers from main roads and bridges but enforcement has often been lax.