E/R: 16 Arrested In Obregyima For Fighting Over Land 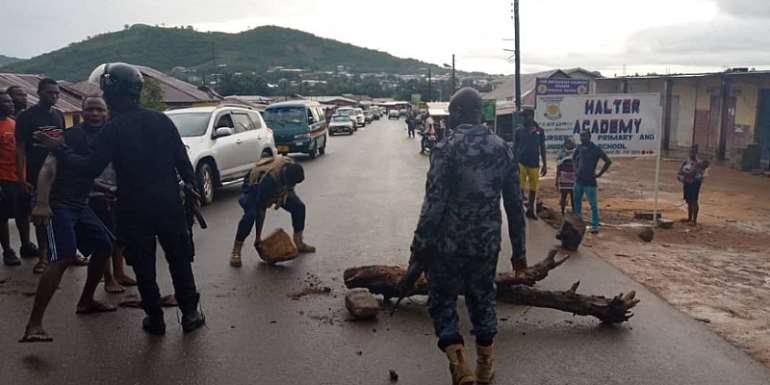 Some 16 residents of Obregyima, a community near Teacher-Mante in the Eastern region have been picked up by Police in a Tuesday dawn swoop.

They were arrested for allegedly attacking and injuring a payloader operator and causing damage to the tyres of the machine.

There has been tension in Obregyima Community between residents, predominantly peasant farmers, and a developer claiming ownership of the vars hectares of land the farmers have cultivated on.

The complainant, Eddie Francis, a Payloader operator,27, on January 24, 2020 rushed to the Teacher Mante Police Post with a cut on the forehead to report that on same day about 10:30 am, while grading the parcel of land for one William Asante Agyakum Acquah, a mob numbering about 20, went on rampage, attacked him and caused injury to his forehead.

He said, the rampaging residents, also caused damaged to three tyres of the Payloader.

Police issued Medical form for his treatment
Background.
Residents of Obregyima in the Nsawam Adoagyir Municipality last week agitated against the destruction of their farmlands by a developer who has come to the community with armed men.

Large hectares of farmlands have been graded destroying crops and fruits planted by the farmers without any negotiation.

Some of the affected farmers said their Orange, Pawpaw, Plaintain, Cassava amongst others farms nearing harvesting have been destroyed.

The farmers claimed the lands were bought by their forefathers hundreds of years ago which they have documentation to that effect.

However, the owners of the land at the centre of agitations say the residents have no right to the protest because the land does not belong to them.

Mr. Kojo Aquah, who is the secretary to the Oyoko Family of Odumasi, which owns the land, says the family gave instructions for the land to be graded and had given the residents several notices of eviction.

#FixTheCountry campaign goes international with over 500,000...
39 minutes ago