Galamsey: Let’s kill this monster before it kills us 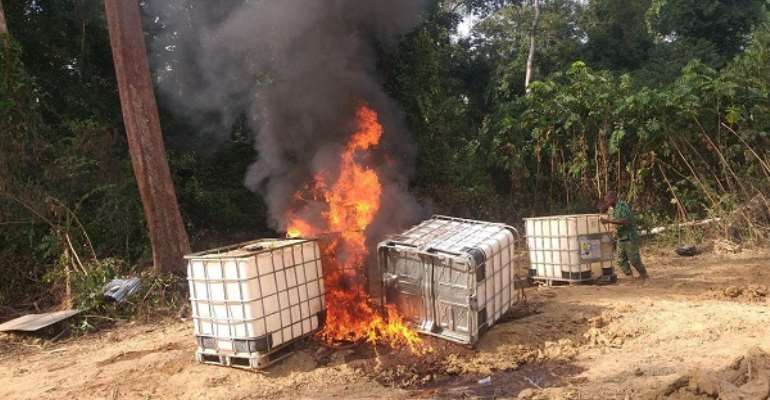 The otherwise green vegetation has been wiped off.

The dark rich nutritious soil of the forest has also been peeled off.

In its place are deep gullies and pits that lie between the heaps of excavated soil.

In those gullies were excavators, Chanfan machines and other equipment that are used as weapons of mass destruction of the environment.

The chirping of birds that would heartily welcome one to the green environment was absent. Rather, the sounds from high pitch Chanfan machines and excavators that pulled down trees could be heard all over.

This was the sight that greeted us when we got to the Oda River Forest Reserve located in the Amansie Central District of the Ashanti Region on January 16, this month.

I had joined the Minister of Lands and Natural Resources, Mr Kwaku Asomah-Cheremeh, on an unannounced visit to the area on a fact-finding mission.

True to what had been reported, the forest reserve was under siege by illegal miners in their desperate search for gold. It was discovered that four illegal mining sites, all about the size of a sports stadium, had sprang up in the 16,443-hectare forest reserve.

As we struggled to make our way through the injured forest reserve, a stream of dirges kept running through my head. I took a look at a scar on my elbow.

I got that scar in 2017 when I fell in a galamsey pit in the heat of the fight against the menace.

A cloud of sadness filled my heart as I began to think about how elusive the fight against galamsey has been.

These thought-provoking questions started begging for answers: Why is it so difficult to crack down on these illegal miners? What have we not done right to curb this menace?

Mr Asomah-Cheremeh struggling to come out of one of the deep gullies caused by illegal miners.

The stream of questions were cut short by the following dialogue between Mr Kwaku Asomah-Cheremeh (K.A-C) and the Manager of the Forestry Services Department (FSD) of the Bekwai Forestry District, Mr Rexford Twum-Damoah (R.T-D):

K.A-C: How did the illegal miners destroy this forest reserve like this?

R.T-D: They entered this forest reserve from January 2, this year.

I led my men to this place, but we realised that they had nine armed soldiers who prevented us from stopping the illegal miners.

K.A-C: I am reliably informed that this illegality is being carried out by the Chinese; of course, it is being facilitated by some Ghanaians. Is this the case?

R.T-D: Yes, the Chinese are doing it with the support of “big men.”

R.T-D: I made some contacts and I was advised to back out to avoid any confrontation and possible clashes with the armed men.

I reported the issue to the Jacobu Police and also contacted Operation Vanguard team at Obuasi.

We came back to the forest reserve a few days later using another route and were able to stop the illegal miners. We pulled out eight excavators and arrested two Chinese nationals that day.

K.A-C: And where are the Chinese nationals and the excavators that you seized?

R.T-D: The Chinese were taken to the Jacobu Police Station, but they were granted bail.

We kept the excavators at a nearby community close to this reserve. But, errrm …, hmm, it amazes me that when we got here this morning, six of the excavators could not be found. We have pictures to show.

K.A-C: You are aware that the mining laws say all equipment and machines that are confiscated must be in the custody of the Lands and Natural Resources Minister. Why did you not inform me about these equipment?

R.T-D: (Silence, in a tensed mood. He broke the silence after a while and went on to say that galamsey was being facilitated by "powerful" and "big men" who sent “their boys” to destroy the forest.

"We know their boys but investigations are still going on so we cannot put out names now," he said.

Some excavators that had been abandoned by the illegal miners;

With the extent of destruction caused to the Oda River Forest Reserve in a matter of two weeks, it is evident that there is no hope for this country.

For instance, a 2011 report by the Food and Agriculture Organisation (FAO) estimated that between 1990 and 2010, Ghana lost an average of 125,400 hectares of its forest cover, representing 1.68 per cent of forest cover per year.

The Forestry Commission also estimated that about 6.6 million hectares of Ghana's 8.2 million hectare forest reserve had been depleted over the years through indiscriminate human activities.

It added that the remaining 1.6 million hectares of the forest cover was being threatened through galamsey, illegal lumbering and other human activities.

Also, the Ghana Water Company Limited (GWCL) recently warned that residents of the Western Region would not have access to treated water if galamsey was not stopped in the area.

As recently as Monday, January 20, four illegal miners were trapped to death in a galamsey pit Obengkrom in the Ellembelle District in the Western Region.

To get an idea about the devastating effect of illegal mining on this country, please refer to the article “Galamsey – when a national asset becomes a curse” and which was published in the Daily Graphic of December 16, 2019.

(Below is the link to that article: https://www.graphic.com.gh/features/features/galamsey-when-a-national-asset-becomes-a-curse.html)

Illegal mining also has crosscutting effects on a number of SDGs, especially SDG Six, on clean water and sanitation; SDG Three, on good health and well-being.

Meanwhile, the Minister of Environment, Science, Technology and Innovation (MESTI), Prof. Kwabena Frimpong-Boateng, is optimistic that the government will smoke out all galamseyers.

The minister, who is the Chairman of the Inter-ministerial Committee on Illegal Mining (IMCIM), told the Daily Graphic in an interview on Monday, January 20, that there was a well-rehearsed strategy to weed out the illegal miners.

“We know where they are because we have their data base; and we are going to take serious action to deal with them,” he stressed.

The fight against galamsey is a duty call to save this country from destruction.

All who matter – political actors; security agencies; civil society organisations (CSOs); traditional authorities; the media; citizens, must all respond to this national call.

Emperor Haile Selassie hit the nail on the head when he made the profound statement:

“Throughout history, it has been the inaction of those who could have acted; the indifference of those who should have known better; the silence of the voice of justice when it mattered most; that has made it possible for evil to triumph.”