Ambassador Arikana Chihombori Quao, The Activist With The Voice Of An African Lion 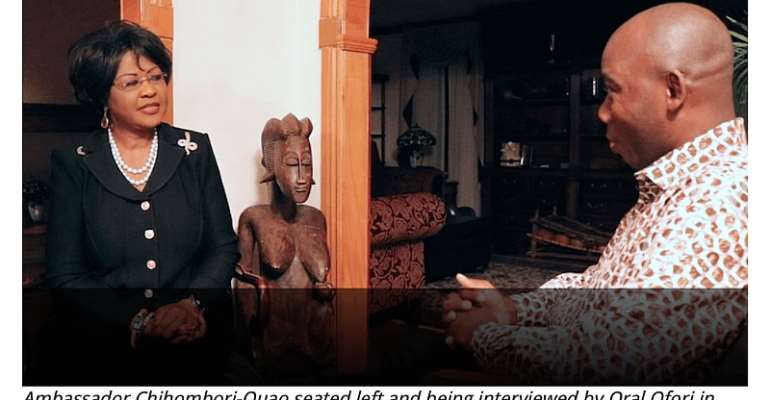 Her Excellency (HE) Ambassador Arikana Chihombori Quao MD is a medical doctor and an activist with the voice of African Lion. She is a public speaker, educator, diplomat, founder of several medical clinics, an entrepreneur and a Fellow of the American Academy of Family Physicians.

In 1977 she moved to the United States from her birthplace of Zimbabwe. And almost 2 decades down the line in 1996, she received an award from the late President Nelson Mandela of the Republic of South Africa in recognition of her contributions to Africa.

HE Ambassador Chihombori Quao MD who is the second African Union Representative to hold this position succeeded Ambassador Amina Salum Ali of Tanzania who assumed office in 2007. The Doctor holds a bachelor's degree in General Chemistry, a master's degree in organic chemistry, and a Doctor of Medicine degree. She worked as a family medicine specialist where she practiced medicine for 29 years in Murfreesboro, Tennessee in the United States.

Read also: Outrage over the sacking of AU Ambassador Chihombori-Quao

The Activist who grew up in the village of Chivhu in Zimbabwe is noted for her outspoken stance on the implications of the Berlin Conference that took place in Berlin, Germany, in 1884 and how it continues to negatively impact Africa to date. A matter she speaks on in her numerous lectures. She seeks to reunite African states and Africans in the Diaspora.

From 2012 to 2016, the Ambassador served as the Chair of the African Union-African Diaspora Health Initiative where she worked on mobilizing African health professionals in the Diaspora to assist with healthcare crisis in Africa.

In January 2019, HE Ambassador Chihombori Quao MD launched the “Wakanda One Village Project” to begin in Zambia and Zimbabwe as a result of both countries offering land in support. The Wakanda project which seeks to engage Africans in the Diaspora will consist of five African Centers of excellence in the five regions on the continent. These Centers are to be centers of development with state-of-the-art healthcare facilities, hotels, industrial homes, and shopping centers among others.

At the African Union Summit In 2015, she received the “Women of Excellence Award” as she worked on her mandate to promote Africa in the Americas by particularly mobilizing the African diaspora including all people of African descent living outside of Africa.

Besides this and other numerous awards won, the former African Union Representative to the United States was declared 2019 Person of the year by the reputed publication the Guardian Nigeria.

HE Ambassador Chihombori Quao MD is seen in this late January 2020 video with storyteller and blogger Oral Ofori whom she shares some of her passion during an interview in Washington, DC. There's been a roaring global call for H.E. Ambassador Arikana Chihombori Quao MD to become the African Union Commission Chairman, find out her response in the video below and what the future holds…