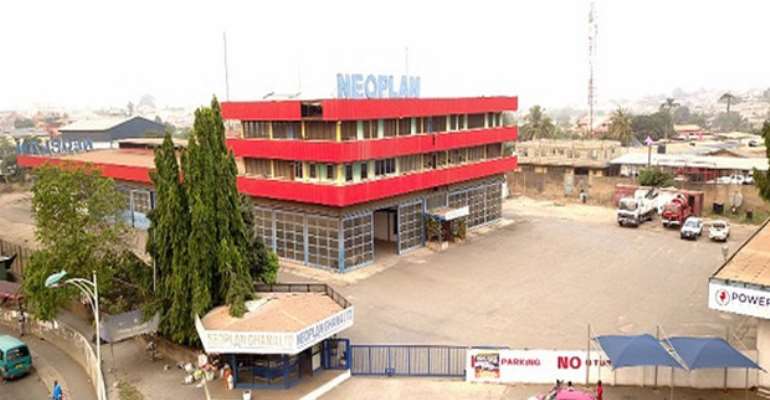 The announcement about the closure of Neoplan, manufacturers of coaches in the country, at the end of this month has expectedly prompted discussions at the highest echelon of government.

An intervention is likely, as some 100 staff members of the company are likely to lose their job. This is something government would not countenance at this time of heightened efforts to stem the rate of unemployment in the country.

Details of the discussions about how to salvage Neoplan are unavailable at the moment but DAILY GUIDE can confirm its possibility.

The ominous internal memo announcing the closure of the once thriving coach production company has already been posted on the company's notice board.

According to Georges Nasser, the Managing Director, “the closure is informed by the inability of the minority shareholder to continue funding the company all by itself, while the government which was the majority shareholder contributed nothing to its running.”

Neoplan has offices in both Accra and Kumasi and until the company was afflicted by its predicament it was a household name in the private bus industry in the country.

The Private Public Partnership (PPP) venture which has suffered the effects of stiff competition from Korean, Japanese and other foreign coach manufacturers badly need more businesses to provide it with a necessary lifeline.

Already, a pressure group called Concerned Voters Movement (CVM) has called on President Akufo-Addo to intervene to save the company from closure.

The Founder of the CVM, Razak Poku, who has followed the plight of Neoplan Ghana Limited which has been in existence since 1974, noted in a statement that “it has produced over 4,000 buses for state institutions, Metro Mass Transit, tertiary institutions and others.”

In 2002, President Kufuor's government contracted the company to build 450 DAF/VDL buses for Metro Mass Transit, a transaction which ended in July 2010 and since then no such contract has come its way.

Government is the majority shareholder in the company and the rest is owned by a private company, Fadoul Group.

CVM has bemoaned the ominous news from the company and, therefore, called for a positive response from government to reverse the state in which Neoplan is now.

“We are urging President Akufo-Addo to intervene and save the collapsing Neoplan (Ghana) Limited,” the movement stated and added, “we are hopeful that the President would do something positive about Neoplan.”

“Government cannot continue to rely on the importation of Chinese, Korea and Indian buses at the detriment of Neoplan (Ghana) Limited, a 55% government-owned company. This is absolutely unacceptable. If previous governments did nothing about Neoplan, the incumbent government would act positively,” CVM stated.