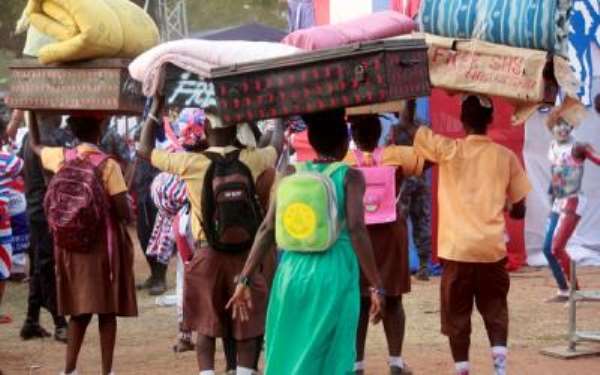 SHS students may be asked to return home due to delayed funds and shortage of food items.

Starr News checks in the Eastern region reveal most schools have run out of food.

Some headmasters who spoke to Starr News under the condition of anonymity described the situation as “terrible”. One of them noted, “I had to feed students from my pocket from last week and this week”.

Another Headmaster lamented ” As we speak now, all First years, Green 2nd years and SHS 3 students are all in school but nothing has been paid as at now”.

The Education Ministry on January 8, 2020, assured that Senior High Schools will receive their funds for the academic year within 10 days.

It was after the Conference of Heads of Assisted Secondary School (CHASS) had served notice that schools were struggling to operate and that they could not endure beyond January 22, 2020 without funding.

Starr News checks indicate funds have still not been disbursed to the Schools almost three weeks into the academic year.

Leadership of CHASS has notified the Ghana Education Service over the likelihood of closing down the schools.

However, the Director-General of Ghana Education Service has pleaded with Executives of CHASS to exercise restraint saying efforts are underway to disburse the funds by Friday, January 31,2020.

But Executives of CHASS have directed its members to inform their District, Municipal and Metropolitan Directors of Education to know the situation in their respective schools and the number of days they can sustain running the schools so they impress upon the Regional Directors for advice.

A total of 1.2 million students are currently in Senior High schools across the country uder the Free Senior High School Policy implemented since 2017. Government says the Policy has increased SHS enrollment by 69%.

However, the exponential increase in enrollment has led to infrastructure and logistical challenges which government is addressing.

An NGO, Voluntary Partnerships for West Africa (VPWA) recently called on government to facilitate measures aimed at addressing challenges of the free SHS policy to ensure that the policy achieves its intended objective.

This follows research conducted in a total of 37 SHSs in Eastern and Ashanti Regions by the NGO which revealed delays in release of funds, inadequate infrastructure, increased workload of teachers, delay in food supplies and difficulty in controlling students as major challenges affecting the Policy.