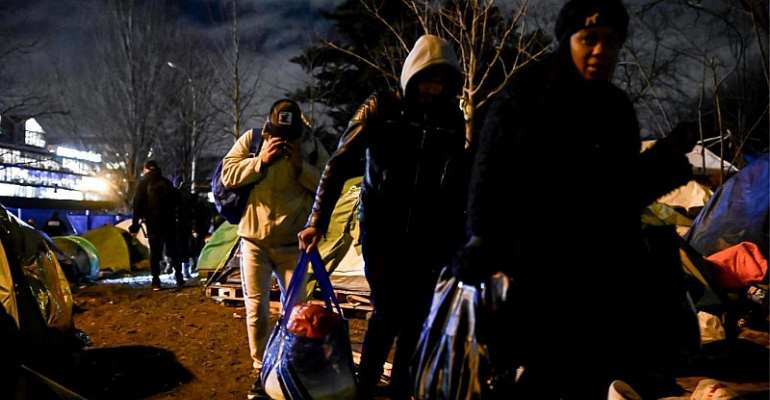 Between 900 and 1,800 hundred people were evacuated from an outdoor camp in the north of the French capital on Tuesday as part of a push from government and state officials to show they are being tough on irregular migration.

Carrying bags and leaving behind tents, mattresses, bicycles and various objects, people living in the camp calmly boarded buses to be taken to gymnasia or temporary housing.

“I'm relieved by this operation because it was getting hard to bear the cold,” Yssouf, a 29-year-old man from Côte d'Ivoire, told AFP agency. “I'm happy to be offered housing, even though I know it will not last long. It's better than nothing.”

State officials estimated between 900 and 1,800 people lived in the muddy camp of tents and shacks at the Porte d'Aubervilliers site near the Périphérique ring road.

Police evacuated some 1,600 people and dismantled a similar camp at the nearby Porte de la Chapelle on 7 November after the government promised to clear insalubrious camps from the north-east of the French capital.

The operation “follows the one in early November at Porte de la Chapelle and is consistent with the engagement” of Interior Minister Christophe Castaner, said Paris police chief Didier Lallement at the scene of the evacuation.

Endless cycle of evacuations
Since the closure of the huge “jungle” migrant camp in the northern city of Calais in 2016, many asylum seekers have moved to Paris.

Police have regularly dismantled illegal campsites only to see them pop up in different locations.

Lallement said police would patrol the Porte d'Aubervilliers site to ensure a camp would not resurface, claiming they had successfully done do at Porte de la Chapelle.

“We will not fall back into to the endless cycle of evacuations and resettlements,” Lallement said, adding the camps were “places of poverty and desperation but also of criminality”.

some 300 migrants have set up a new camp at the nearby Porte de la Villette as migrants with complex and irregular immigration situations leave housing centres.

“Administrative hurdles keep a majority of inhabitants of these camps in the street,” said NGO Utopia56, which offers humanitarian aid to people living in the camps. “The appearance of new camps after each evacuation is inevitable”.