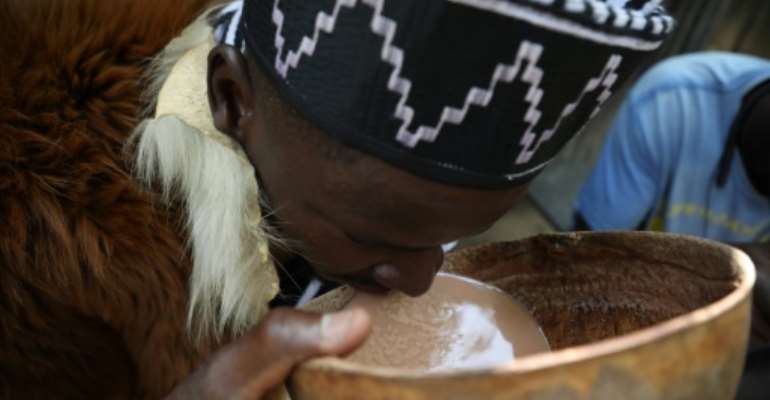 Cheers: Burukutu has been brewed for generations by the Jukun people of central and northern Nigeria. By Kola Sulaimon (AFP)

Government worker Iorliam Shija sits in one of the ramshackle bars along the banks of the Benue river in central Nigeria sipping from a gourd filled with frothy burukutu.

The vinegary alcoholic beverage has been made here for generations from the fermented grains of sorghum and millet and consumed as a traditional alternative to beer.

Now, as Nigeria's economy struggles to grow, the local brew is enjoying a boom from clients looking for a cheaper option.

"If you have beer or burukutu, I will go with burukutu," Shija told AFP.

"It is natural and it is what our people are used to drinking." 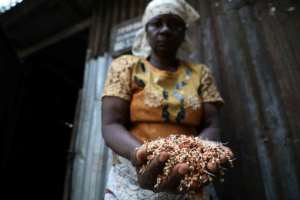 Sorghum, along with millet, provides the ooomph to burukutu. By Kola Sulaimon (AFP)

Even though it is still early, the makeshift joints are already filled with drinkers young and old, male and female.

Women ladle the brownish liquid -- which typically varies in strength from around four to 10 percent alcohol -- out of large clay pots into dried calabashes for customers to drink alone or in a group.

Typically burukutu -- which has its roots with the Jukun people of central and north Nigeria -- is consumed by all stratas of society and serves as an important focal point for social gatherings.

But those partaking say that as Nigeria's economy limps along more people in this rural area are turning to it instead of the more expensive mass-produced beers.

Emmanuel Anthony has come to join friends even though he admits he has no money in his pockets.

"The reason why I am taking it is that I want to cut cost," he says. 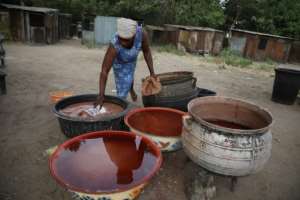 Making burukutu is a time-consuming business -- it takes three days to steep, ferment, filter, boil and refilter the brew. By Kola Sulaimon (AFP)

"The economy is bad for now. I cannot go outside and start living above my means."

Nigeria's economy is still struggling to shake off its hangover after emerging from its deepest recession in decades in 2017.

The government is predicting that growth will reach 2.93 percent in 2020, but that is still well below earlier levels and poverty rates are increasing as population numbers surge. 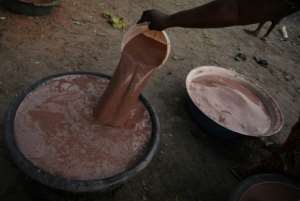 Freshly-made burukutu: The beverage can vary in alcoholic strength from around four percent to a hefty 10 percent. By Kola Sulaimon (AFP)

Artisan Chris Achochi, who lives close to Nigeria's capital Abuja, said the drink was a cheap way of bringing friends together.

"Burukutu is very cheap and it is an advantage to us, the way we are living in the country now," he said.

"With just 1,000 naira, you sit out with friends and drink enough but with the same amount, you cannot cope with beer."

Not to all tastes

Mary Ngoo has been in the business of brewing burukutu for over 30 years.

To keep her thirsty customers satisfied she wakes up in the early hours of the morning each day to begin the cooking process.

Production involves steeping the seeds in the water, before washing, grinding, fermentation, filtering, boiling and re-filtering. 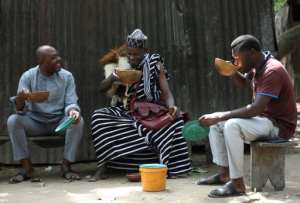 Many Nigerians prefer the taste -- and price -- of burukutu over industrially-made beer. But others are deterred by quality control and hygiene standards. By Kola Sulaimon (AFP)

As she stokes firewood to keep the flames high, she insists the brewing process is not too complicated -- but it demands time.

"It takes an average of three days to get the liquor ready for consumption," she says.

The traditional method of production means that burukutu is not to everyone's tastes -- and possibly poses more health risks than beer.

A 2017 study by Nigerian academics comparing "chronic" beer and burukutu drinkers suggested it had a greater impact on the livers of consumers "due to its relatively high alcoholic content obtained by local and unstandardised brewing process".

It is the lack of hygiene standards or quality control that has put off businessman Hilary Achia.

"I don't drink burukutu. I am a very conscious hygienic person. I don't think I agree with the method of processing it so I am a little cautious and choosy in this aspect," he said.

"I rather go with beer which I have at least a fair idea of the production method and hygienic nature to some extent. I think I will go with bottled beer instead of burukutu."