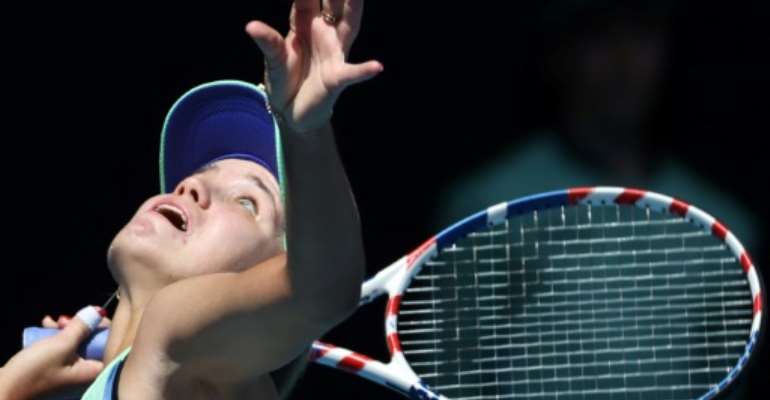 Sofia Kenin said she was living the "American Dream" on Tuesday after the Moscow-born 14th seed with a stars and stripes racquet reached her first Grand Slam semi-final at the Australian Open.

The 21-year-old, who beat fellow American Coco Gauff in the previous round, faces top seed Ashleigh Barty in the last four after defeating unseeded Ons Jabeur 6-4, 6-4.

Kenin, who lives in Florida, moved with her family to the United States when she was very young, reportedly with just a few hundred dollars to their name.

"My parents moved to America so I could have the American dream," said Kenin.

"They gave me an American dream. I'm proud of it and thankful for them," added the world number 15, who will now rise to at least 12 -- matching her career high, and becoming the second-ranked American behind Serena Williams.

Kenin, a fiercely proud American with an aggressive playing style, said holding serve at 2-3 in the second set, a game that stretched to 10 minutes, was a turning point against Tunisia's Jabeur.

"It was a tough moment, she was playing well. I didn't know it was 10 minutes but it felt pretty long," she said.

"But after that I got my momentum and started playing better."

The 78th-ranked Jabeur, the first Arab woman to reach a Grand Slam quarter-final, was always on the back foot.

The 25-year-old hit 18 unforced errors in the first set to Kenin's six.

Jabeur grazed her shin with her racquet in the second set and Kenin sealed her spot in the semi-finals at the first match point when Jabeur's return flopped into the net.

Kenin, who turned professional in 2013, won her first three WTA titles last year as her career started to take off.

She paid tribute to her family, especially her father Alexander, who is also her coach, for supporting her when others did not.

"I really had to establish myself to show everyone who I am," said Kenin, who came into Melbourne with little fanfare and had gone under the radar -- until now.

"I think a big part that got me here is my family were there for me.

"It was obviously tough. Like I said, people didn't really believe in me and everything.

"But they believed in me, especially my dad, since he's been with me through this incredible journey."